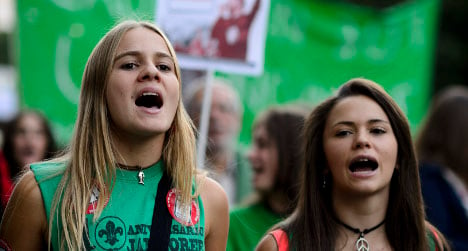 Angry students during the third day of demonstrations on Thursday against the Spanish government's cuts in education spending. Photo: Dani Pozo/AFP

The demonstrations in Madrid and 16 other cities came on the last day of a three-day nationwide strike by university students.

The national Students' Union which organised the protests and strike says tuition fees have jumped by 50 percent since the conservative Popular Party (PP) came to power in December 2011, leaving universities with 45,000 fewer students because they cannot afford to study.

The union also says the government has cut spending on public education by around €7 billion euros ($9 billion) since it came to power and fired around 32,000 teachers.

"Young people have had enough of the PP's classist policies," she said at the march in Madrid.

Thousands of people marched through the streets of the Spanish capital from Plaza de Neptuno near the Prado Museum to the central Sol square, snarling evening rush hour traffic.

"Defeat the PP" and "Enough!" were some of the signs on display at the march.

Students are also angry at government reforms which tighten academic requirements to access university study grants and require university students to take tests at the end of every academic year to earn re-entry.

The reforms also give a greater weighing to Spanish language teaching, a measure which has especially angered students in regions such as Catalonia in the northeast or the Basque Country in the north where other languages are spoken.

The government argues the reforms are designed to improve education standards in a country where over half of all young people are out of work, and reduce a ballooning public deficit.

Prime Minister Mariano Rajoy's government has raised taxes, frozen public salaries and curbed spending on services such as education and healthcare to reduce its budget shortfall.

Spain is targeting a deficit of 5.5 percent of gross domestic product (GDP) at year-end, within a 5.8 percent goal set by the European Union

It has pledged to reduce its public shortfall to within a EU limit of 3.0 percent of gross domestic product by 2016.

Spain emerged last year from a six-year slump triggered by the end of a decade-long property boom that forced it to seek European aid to bail out its banking sector.