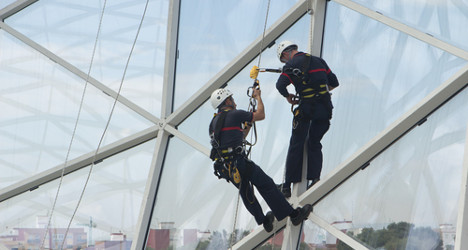 Unemployment in Spain stands at 23.67 percent, according to the latest Active Population Survey (EPA) covering the third quarter of 2014. The figure remains one of the highest in the developed world, but the good news for Prime Minister Mariano Rajoy's conservative government is that it is falling.

The National Statistics Institute's second-quarter survey said 24.47 percent were out of work before the summer while a year ago the figure stood at 25.65 percent.

The total number of jobless in Spain now number 5.43 million, down from just under six million one year ago. The drop of 515,700 in one year is the biggest year-on-year reduction ever seen in the third quarter, according to this statistical series.

The jobless rate among the under-25s was still extremely high at 52 percent and there were 1.79 million families with all working-age members unemployed.

The number of people looking for work in Spain fell by 195,000 in the third quarter — the biggest such decline on record for that period. But that left 5.4 million people still without a job.

Most of the jobs created this summer were in services, but the figures showed the manufacturing industry also started to generate work again — as did the construction sector which sparked Spain's economic crisis when it collapsed in 2008.

Spain's conservative government is forecasting that unemployment will fall to 22.2 percent by the end of next year.

"For the first time since the crisis, our country is going to see net job creation in 2014," Labour Minister Fatima Banez said on Thursday.

It forecasts the economy will grow 1.3 percent in 2014, bouncing back after six years of crisis that brought it close to financial collapse.

After officially exiting recession in mid-2013, the economy has been growing steadily this year. The central bank on Thursday estimated growth of 0.5 percent for the third quarter compared to a year ago.

It warned however of lingering economic risks in the eurozone, where growth has ground to a halt overall.The EPA calculation of Spain's unemployment rate is based on a quarterly survey of 65,000 households across the country.

The EPA – different from the monthly figures provided by Spain's Labour Ministry – is considered the clearest picture of unemployment in the country as it also captures people who are looking for work, but are not registered at the country's employment offices.