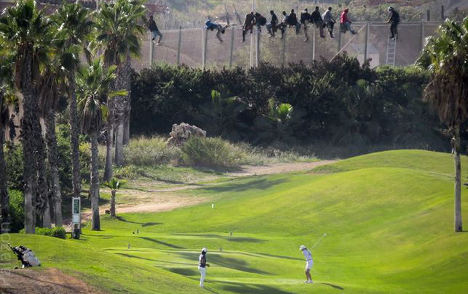 Bunker mentality: At first glance, the image appears to capture an idyllic morning round of golf. Photo: José Palazón/Prodein

At first glance, the image appears to portray an idyllic morning round of golf: a player in crisp white swings at a ball as palm trees cast shade over the fairway.

But look beyond the rolling greens (and upwards) and you'll see the line of men seated on a 6-metre (20-foot) high fence in the background.

Taken on Wednesday morning at around 10.30am, the picture shows African migrants perched on the border fence between Morocco and the Spanish city of Melilla.

They are just some of the 200 or so men who tried to cross into the city in search of a better life in Spain on Wednesday. Around 20 made it over the fence while dozens spent hours on top of the fence, the Spanish government said. "The picture shows the huge difference between the two worlds and is a symbol of all the terrible things going on," José Palazón, the president of the human rights group Prodein, and the man who snapped the image told The Local.

"These immigrants have absolutely no human rights at all. They fall between the gaps," he said via telephone.

Palazón is also the man behind a recent video of a migrant beating beaten by Spanish border police and illegally dumped back inside Morocco territory .

The video caused outrage with both the United Nations and the European Union criticizing Spain. On Wednesday, Spain's interior ministry responded by saying it would introduce new rules ensuring that injuries to migrants were minimized.

Close to 2,000 African immigrants have managed to enter Melilla, a city of about 80,000 people, so far this year, the ministry said.

On Tuesday, the head of the Spanish government delegation in Melilla, Abdelmalik El Barkani, said the number of massed attempts by desperate migrants to scale the triple layer fence separating Melilla from Morocco had surged so far in 2014.

"Last year there were 38 attempts overall. So far this year there have been 58, so we can say that at this rate the pressure on the border fence compared to last year has roughly doubled."