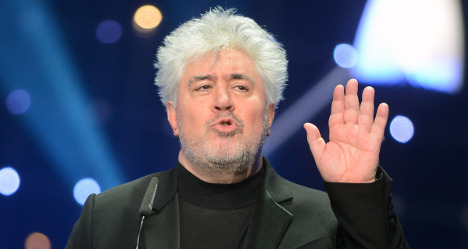 The director behind classics like Women on the Verge of a Nervous Breakdown and Tie me up! Tie me down! issued the public apology for comments he made while attacking Spanish banks which took advantage of some customers’ lack of financial knowledge by selling them sophisticated and highly risky share packages before the full extent of the country’s banking crisis became apparent.

The dubious goings-on within Spanish savings banks have once again been in the news in recent weeks with the revelations that Caja Madrid (later Bankia) directors Miguel Blesa and Rodrigo Rato were among officials at the entity who enjoyed the use of courtesy credit cards which they were able to use for all kinds of personal expenses without the sums of money being declared or accounted for.

“If I had been an illiterate Galician man who had been made to sign (a share purchase) with his finger, because I don’t know how to write, and now I find out about these opaque credit cards, to be honest I would wait around the corner for Mr Blesa or Mr Rato and cut his damn throat”, Almodóvar said on Tuesday in an interview on Cadena Ser radio station.

The remarks led to complaints in Galicia in relation to what some saw as a prejudiced view of Galicians as backward people. The platform Xuntos, which has campaigned for justice for Galician victims of the so-called “preferential” shares scandal at Caixa Nova Galicia savings bank, among others, asked Almodóvar to apologize for painting an image of Galicians as “uncultured and illiterate”.

“I am deeply sorry if in the interview last Tuesday I offended anyone. That was the last thing I wanted to do, but perhaps I expressed myself clumsily”, Almodóvar said in a statement released on Wednesday.

“I wish to clarify that the real intention of my words in relation with the preferential share victims was, first of all, to show my solidarity with people who were deceived by banking entities in which they had placed their trust, but which sold them financial products which have been shown to be false," he said.

"I also wanted to demonstrate my indignation with the directors of these entities who have been enjoying unlimited and concealed credit in recent years to pay for completely personal expenses such as going to nightclubs, pleasure trips and all kinds of luxuries,” Almodóvar continued.

He went on to explain that he had felt “stupefied” on reading in the media that many preferential share purchasers “in different parts of Spain” had marked their contracts with a cross or a fingerprint, showing that they were completely unaware of what they were signing up to.

Between 1999 and 2004, some €18.3 billion ($23.1 million) worth of preferential shares were sold in Spain, to around 50,000 people, mainly pensioners. After that, when sales fell sharply, many banks instructed their staff to pressure customers to buy. Up to 2011, with the financial crisis biting harder, and banks desperate for cash, €31 billion worth of preferential shares were sold, according to the newspaper El País.

“I am not a violent person and I feel nothing but admiration for the culture, landscape and gastronomy of the Galician people,” the Oscar-winning director concluded.

Among the revisions in the latest edition of the RAE Spanish Royal Academy dictionary, published earlier in October, was the removal of the usage of “gallego” (Galician) which meant "stupid" or "stammering".