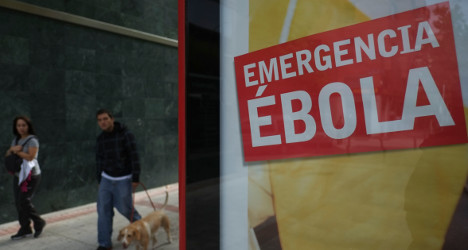 The five were told they could go home after serving out their required 21 days in quarantine, Spain's El País newspaper reported.

The group includes the doctor who treated Romero at a medical centre before she was diagnosed with the virus, a cleaner at the same centre, two beauty salon employees, and one of the nursing assistant's friends.

Among those still in isolation are Romero's husband Javier Limón.

Romero, the first person to catch Ebola outside Africa, was declared free of the deadly virus on Tuesday but remains under supervision in hospital.

She was "experiencing an emotional slump" after her time in isolation and after learning her dog Excalibur had been put down, a spokesperson for her family said on Thursday.

The dog was put down by health authorities over concerns the animal could spread the virus, a decision which angered people in Spain and around the world.

Romero was one of the nursing staff at the Carlos III hospital who treated two elderly Spanish missionaries who caught the disease in Africa and died in Madrid in August and September.

Spain's handling of her case has been widely criticized with many calling for the resignation of health minister Ana Mato.