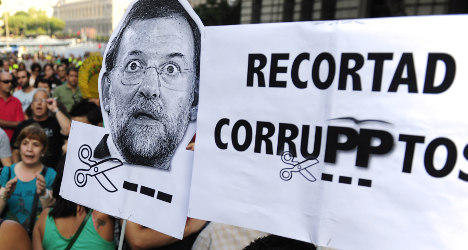 Cut it out: Prime Minister Mariano Rajoy's face on a banner at an anti-corruption protest in Madrid in 2013. File photo: Dominique Faget/AFP

With a year to go until the next general election, political parties, which have long been accused of turning a blind eye, talk of stepping up the fight against corruption at a time when almost one in four Spaniards is out of work.

The most famous name to pay the price is Rodrigo Rato, a former head of the International Monetary Fund and one of the pillars of the ruling conservative Popular Party (PP).

The 65-year-old is at the heart of an investigation into allegations that he and dozens of other executives at troubled lender Bankia spent a total of 15 million euros ($19 million) with secret company credit cards on personal expenses, ranging from groceries to safaris.

Rato paid a three-million-euro court bond on Wednesday to cover his liability in the scandal as the investigation continues. The former economy minister on Monday asked for his PP membership to be temporarily suspended as pressure grew on the party to exclude him.

Rato stepped down as chairman of Bankia in May 2012 as the extent of the bank’s troubles became clear. Bankia’s near-collapse caused thousands of customers to lose their savings and pushed Spain to seek a 41-billion-euro international bailout for its financial sector in June of that year.

Spain's political class has been shaken by the rise of a new anti-austerity and anti-elite party, Podemos, which vows to "protect the people from financial power and corruption".

Podemos, which means "We Can" in Spanish, stormed past more established opposition groups to take fourth place in Spain's EU elections in May. It has since come in third place in opinion polls and styles itself as a genuine alternative to the big two of the PP and Socialist Party as the next government in Spain.

For its part, the Socialist Party has expelled all members caught up in the Bankia credit card scandal.

"With the crisis, people have become much more inquisitive and are searching for the causes of economic problems. This is putting parties under enormous pressure," said Fermín Bouza, a sociologist at Madrid's Complutense University. "There is enormous panic at the thought of being found guilty of any sort of corruption."

Corruption scandals have hit both the left and right, businesses and unions, football clubs and even the king's sister. In Spain's poor northwestern region of Galicia one mayor in nine has been charged with corruption, according to a tally by regional daily newspaper La Voz de Galicia.

The former president of the wealthy northeastern region of Catalonia, Jordi Pujol, the champion of Catalan nationalism, and his family are the target of police and tax office investigations.

Pujol’s youngest son, Oleguer, was briefly arrested on Thursday morning as his Barcelona home was searched by police. He has been accused by an investigating judge of laundering money, with the focus firmly on property deals in 2008 in which he spent 2.5 billion euros in acquiring Banco Santander offices and branches and other buildings.

The money for these purchases allegedly came from tax havens including the Channel Islands, Dutch Antilles and Luxembourg. Oleguer Pujol was released later on Thursday once the house search had been concluded.

While hundreds of officials are charged with corruption, only a handful are found guilty and carry out their sentence in jail.

"People are outraged because the political parties have not reacted quickly and the justice system works very slowly," said José Juan Toharia, the president of polling firm Metroscopia. He blames the slowness of the justice system on the fact that Spain has proportionally fewer judges than other major European nations.

The country has half as many judges per 1,000 people than France, and four times fewer judges than Germany, Toharia said. "This creates an impression of impunity which despairs people," he added.

The government has campaigned against corruption because it knows that it cannot win re-election solely on the argument that the economy is recovering, since the improvement is slow and it will take a while to improve people's lives, said Manuel Villoria, a corruption expert. He has proposed a reform of Spain's legal code that would include a law on political party financing and tighter rules for top officials to avoid conflicts of interest.

"I doubt that many of the measures that have been announced will be enacted," added Villoria, a founding member of global anti-corruption campaigner group Transparency International and a political science professor at King Juan Carlos University.

"I demand that we give control bodies like prosecutors more independence," said Villoria.