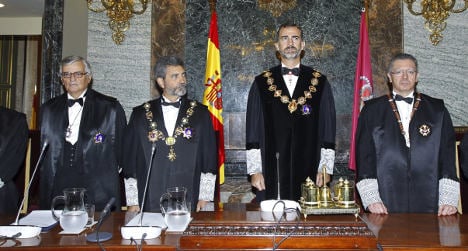 The chief magistrate of Spain’s Supreme Court and president of the judicial watchdog the CGPJ said Spain cannot make democratic advances while the justice system remains ineffective and overburdened.

Speaking at a conference organized by the newspaper the conservative newspaper La Razón, Carlos Lesmes said: "If the judiciary does not function, there can be no democratic regeneration in our country; we must all push for the strengthening of this institution."

Justice is notoriously slow in Spain, particularly in complex cases, as illustrated in recent times by the high-profile Gürtel political kickbacks case and the Andalusian government subsidies fraud probe, which have been investigated by judges since 2009 and 2011, respectively, without any of the major suspects having been put on trial.

Speaking at the event before fellow judges and senior members of government, including Interior Minister Jorge Fernández and the government’s new justice chief, Rafael Catalá, Lesmes said that without a major overhaul of the court system, complex cases involving corruption and other kinds of sophisticated criminal activities could not be dealt with effectively.

The current Criminal Trial Law, he said, is designed for "chicken thieves, not for major fraudsters or for the cases we are seeing now involving such high levels of corruption".

He underlined the fact that Spain’s main political parties agree that the current legal system is “inadequate” to bring corruption to heel and urged those in power to correct its deficiencies.

Any new law, he said, should give prosecutors a bigger role during the investigative stage, as in other continental European countries.

In Spain, a single investigative judge oversees the preparation of a case, often adding fresh components to the probe which then becomes an unwieldy and extremely slow process.

One of the dangers in this is that the statute of limitations can expire if several years elapse between the crime and the eventual trial.  Lesmes criticized this tendency to create "macro-trials" which cannot be carried out for many years after the facts being investigated occurred.

However, Lesmes himself is at the head of a system which has been widely criticized as being too politicized and subject to horse-trading over appointments.

He was chosen as CGPJ and Supreme Court chief last December as a result of an agreement between Prime Minister Mariano Rajoy and the then-leader of the opposition, Alfredo Pérez Rubalcaba. Most of the vacant seats on the CGPJ went to magistrates with connections to conservative or left-leaning judges’ associations in accordance to the relative parliamentary strength of the two main parties, the ruling Popular Party (PP) and the Socialists.

Lesmes, who is seen as a Catholic conservative close to the PP, refused to be drawn on whether it was preferable for top judges to continue to be chosen by parliament or elected by members of the profession, as some have suggested.

"The important thing is that the selection is done well," he said.

Justice Minister Catalá has said he will drive forward the court reform process instigated by his predecessor, Alberto Ruiz-Gallardón, who resigned last month after his proposed restrictive changes to Spain’s Abortion Law were not supported by the Rajoy government.