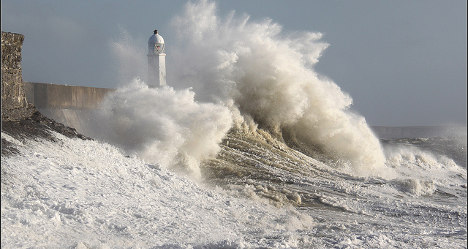 The wave which hit during wild winter storms nudged out the previous holder of Spain's biggest wave: a 26.13-metre giant near the city of Santander during 2009's dramatic Cyclone Klaus. File photo: Be

The huge wave — "the single biggest wave ever recorded in Spanish waters" — was measured by buoys off Galicia's Cape Vilan on January 6th, Spain's port authority said on Wednesday.

Measuring 27.8 metres (91.2 feet) from crest to trough, the wave rose had a staggering 'significant height' of 12.4 metres, or roughly the height that can be 'seen' by a trained observer at sea.

The wave which hit during wild winter storms nudged out the previous holder of the biggest wave: a 26.13-metre giant near the city of Santander during 2009's dramatic Cyclone Klaus.

It was also a genuine freak 'wave' as its actual height was more than twice its significant height.

The wild weather seen in Spain in the winter of 2013–2014 has not been worse than usual, Spain's port authority in a statement.

However, it was notable for its large individual waves, with two other buoys registering records. The Estaca de Bares buoy saw a new record wave of 22.03 metres on January 6th while the Silleiro buoy registered a 20.93-metre wave on March 3rd.

Spain's autumn storm season kicked off in a big way on Sunday with flash flooding causing the death of one woman on the Canary Island of Tenerife.