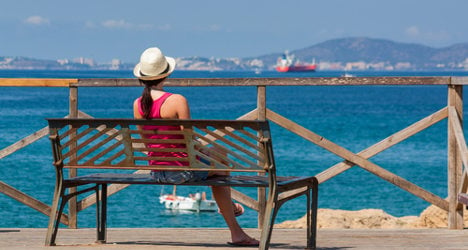 Photo of a woman on a bench: Shutterstock

Parts of northern Europe are looking decidedly autumnal on Tuesday, but many people across Spain are currently enjoy a burst of unexpectedly warm weather.

Indeed it is so balmy that Spain's official weather agency Aemet has even issued warnings for the country's Valencia and Alicante provinces, where temperatures are expected to edge into the low thirties centigrade.

The city of Valencia is expected to see a high of 32C, nine degrees above the monthly average, while the forecast high for nearby Murcia is 33C.

Andalusia is also warmer than usual too, with Seville set for 32C and Granada 33C.

Over in the Balearics, Palma de Mallorca should also have a warmer than usual day with a maximum of 31C.

Even Bilbao in the Basque Country, where rain is forecast, is set for a respectable 26C. In Santiago de Compostela, that will be 25C.

Madrid is also seeing warmer weather than usual, with the maximum expected to be 28C — also nine degrees warmer than average, while Barcelona will see a very pleasant high of 26C.

The pleasant weather is expected to continue for several days although temperatures will moderate.