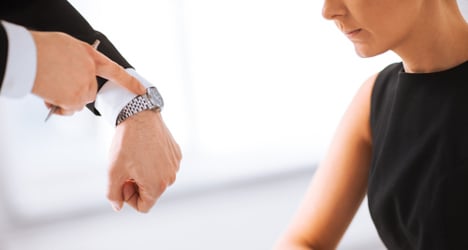 Photo of a man showing his watch to a woman: Shutterstock

Popular Party (PP) councillor Ángel Donesteve, who heads the city’s Hortaleza district, is to apologize on Tuesday for his decision to dismiss an employee on the basis that she had become a mother, the newspaper 20 Minutos reports.

Madrid Mayor Ana Botella has told Donosteve that she was "offended as a mother and a mayor" by his explanation of his decision to fire the woman who had run Hortaleza’s legal services department for 10 years before switching to the post of district secretary, the third most important position in the local administration.

Donosteve had said that "she would rather balance her personal and family life, but I need maximum performance and as many work hours as possible".

This came a year after the employee had had a child, although she had not asked for a reduction in her hours nor any other measure to balance work and family life.

Despite this, the councillor justified relieving her of the role with the following argument: "I was delighted when she happily became a mother a year ago, [but] right now I prefer to have maximum performance. I only have eight months left here at the most, so I want the utmost efficiency from the entire district team," as reported by the daily El País.

"I feel that the residents of Hortaleza deserve complete dedication," he added, although he admitted that during her tenure, "the administrative output of the legal department has increased by 50 percent".

Donesteve will today make his apology to Madrid city council’s Family and Social Affairs Committee, of which he is a member.

The councillor has also offered to reinstate the employee, as ordered by Mayor Botella, but it is not yet clear if the woman will choose to return to her old job or take up another post offered to her by Madrid city council.

City Hall sources say that Donosteve appeared to be "deeply repentant" when called in by the mayor for a meeting to explain his original decision.