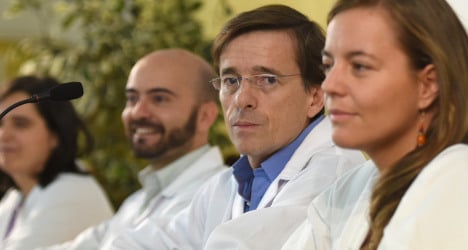 "The criteria set by the World Health Organization for curing the Ebola virus have been fulfilled… She is now cured," Doctor Jose Ramon Arribas, head of the infectious diseases unit at Madrid's Carlos III hospital, told a news conference.

The results for the nursing assistant come 48 hours after an earlier test on Sunday also indicated Romeo was free of the virus.

Arribas said Romero's "physical and mental strength" had been key in her ability to beat the infection, adding it was impossible to know if experimental drugs used in her treatment had been effective as there were no control groups.

The news was met with relief after two tense weeks that generated public sympathy for Romero — along with questions about safety procedures and spending cuts in Spain's health sector.

"We have had a hard, worrying time since this started, but now little by little we can see light at the end of the tunnel. These test results are a cause for happiness," said Marta Arsuaga, one of the doctors treating Romero.

"We have to wait for her to get back to the state of health she had before. Then we will really be happy and ready to celebrate."

Romero was one of the nursing staff at the Carlos III hospital who treated two elderly Spanish missionaries who caught the disease in Africa and died in Madrid in August and September.

Her husband Javier Limon and 14 other people who had contact with the nurse before she was diagnosed are under observation at the hospital but none has yet shown symptoms.

Arribas said a specialist laboratory confirmed that a fourth and final round of tests had shown Romero to be clear of the virus, though she might take "a few days" to completely get over the symptoms.

Arribas said that according to WHO guidelines, officials will have to wait until 42 days after the curing of the last infected patient to declare the country free of Ebola.

The haemorrhagic fever is passed by contact with the bodily fluids of those infected. It begins with fever and can lead to diarrhoea, vomiting, internal bleeding and organ failure.

The WHO in its latest toll said 4,555 people had died from Ebola out of a total of 9,216 cases registered in seven countries as of October 14th.

The spread of the disease outside hard-hit African countries such as Liberia and Sierra Leone has put governments around the world on alert.

The United States has introduced health checks at airports for travellers from the region. Two nurses fell ill in Texas after caring for a Liberian man who died from the disease, but no more cases have been detected there for six days.

Shortly after Romero was hospitalised, officials outraged health care staff by hinting that the patient herself was to blame for getting infected.

He told a news conference that hospital staff treating Ebola patients were given ill-fitting protective gloves and permeable overalls and were not properly trained in how to put them on and take them off.