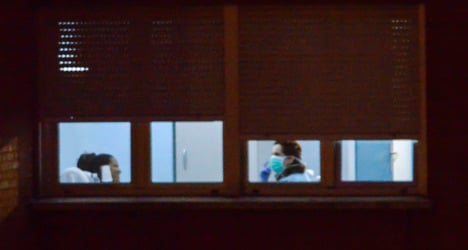 Teresa Romero was recovering "very well" and and "surprises aside" would be able to live a normal life once given the all-clear, a spokesperson for her family said. File photo: Pedro Armestre/AFP

The results of a test to be carried out on Tuesday will confirm whether Romero is indeed now free of the deadly virus, the head of the Spanish health ministry's crisis team Fernando Simón said in a press conference on Monday.

The first negative test result came in on Sunday which meant that the second test would therefore be carried out on Tuesday," he explained.

Romero was recovering "very well" and and "surprises aside" would be able to live a normal life once given the all-clear, a spokesperson for her family said.

If the next round of tests came back positive, the nursing assistant who be move from the sixth floor of Madrid's Carlos III hospital where Ebola cases are being treated to another floor "in four or five days", the spokesperson said.

Romero who has now been in hospital for two week had "a lot energy, a great desire to get outside and find out what has happened, the repercussions and, above all, to breath fresh air", the family spokesperson added.

Romero on October 6th became the first person known to have become infected with the haemorrhagic fever outside Africa, where it has killed more than 4,500 people.

The 44-year-old nurse caught the deadly virus after caring for two infected missionaries who were repatriated from west Africa, and who died shortly after arriving in Spain.

Fifteen people who had contact with Romero before she was diagnosed with Ebola, including her husband, have not yet shown any symptoms but are still being kept under observation in the hospital, said the statement.

The Spanish government recently said Spain would be free of Ebola by October 27th if no new cases were reported.

A new possible case in Barcelona was probably suffering from malaria, Simón said on Monday, although health officials were still waiting on lab results.