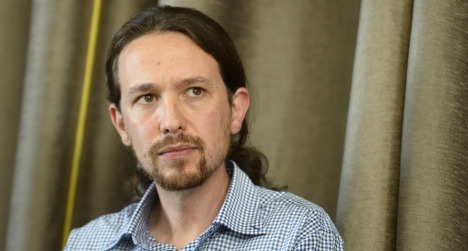 Podemos, the political party which has converted the spirit of Spain’s ‘indignant’ protest movement into a significant electoral force, held its inaugural conference in Madrid over the weekend, with leader Pablo Iglesias making clear that the objective was not merely to register discontent, but to win the next general elections.

"Let us not look inwardly at ourselves, but rather towards the outside. Today sees the birth of a new political force which will change this country. Of course we can!” rang out Iglesias’s closing words at the assembly – a play on the name Podemos (“We Can”) – heralding the opening of an internet voting period which will see some 130,000 registered supporters decide on the new party’s structure.

The party that shocked Spain’s political establishment by coming from nowhere to win eight percent of the vote in May’s European elections, and which some subsequent opinion polls have positioned as the country’s second-biggest force after the ruling Popular Party, appeared to tone down its stance on Spain’s ballooning level of public debt.

While Iglesias had previously scared markets and voters with talk of cancelling the debt, the financial proposal which was backed by Podemos supporters at the weekend talks about an "orderly restructuring" of Spain’s financial burden.

"The objective isn't to not pay the debt, but to return to a level of indebtedness and a sustainable approach which would allow for a recovery in the population’s welfare," explained Bibiana Medialdea, an economics professor who was in charge of presenting the current party leadership’s proposition on finance. This was approved along with policy statements on housing, education, health and anti-corruption measures in a voting process involving 38,000 registered supporters, according to online newspaper Público.

Spain’s public debt now stands at around 95 percent of GDP, despite the country having one of the lowest levels of debt among its European partners before the euro crisis.

Now 130,000 people have registered for the series of votes over the next week in which different structures for Podemos and further policy statements will be chosen. Iglesias, until now the most visible face of the party and one of five MEPs voted in by Spaniards in May, made it clear he wishes to be elected as sole secretary general of the party in the face of an alternative proposal to have three leaders.

"I am a militant, not an alpha male. I will be at the disposition of whoever shows they have majority support," Iglesias said, although he ruled out joining a three-pronged leadership team if his proposal for the party’s structure were to be defeated.

After the results of these founding votes have been announced next Monday, supporters will again be asked to decide on the membership of the party’s leadership committee through online primaries.