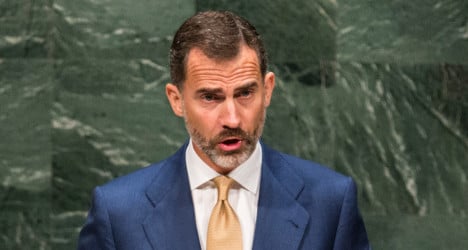 Who is Francisco Nicolás Gómez Iglesias?

Now millions of people in Spain have heard of the fresh-faced man just out of his teens who in just a few years and without any official position in public life managed to hobnob with leading politicians and business figures, even attempting to negotiate in legal matters on behalf of Spain’s former King Juan Carlos.

Many of those he met on the way were initially sceptical about this wunderkind with excellent contacts in the governing Popular Party (PP) but his charm and impressive lists of contacts, backed by the evidence of selfies taken with the great and the good which he kept on his mobile phone, usually smoothed away any doubts.

There is a photograph which sums up Gómez’s vertiginous arrival at Spain’s top table. Hair slicked back and in a dark suit, the young Francisco is shown bowing his head as he shakes the hand of Spain´s new king, Felipe VI, one of just 2,000 people in attendance at the proclamation party last June.

The king has a slightly bemused expression on his face, as well he might. The Royal Household has told the daily El Mundo that the young man attended the event as “the companion of another guest,” before adding that no more comments could be made due to the ongoing judicial investigation into Gómez’s activities.

Besides attending undergraduate lectures at Madrid’s CUNEF financial and legal school, Gómez had an extraordinarily busy and tangled life. He started out as a schoolboy, getting his mother to present him to the FAES think-tank, connected to the PP.

Shortly after, he began to appear at conferences and organised a large meeting of young PP supporters before going to party headquarters and suggesting that a junior congress be set up on a national level with himself at its head. He was only 15 at the time. His request was refused.

But, claiming to be the protégé of the secretary of state for trade in Mariano Rajoy’s PP government, Gómez began to find that other doors would open for him. He was seen in photographs with former Prime Minister José María Aznar, the Madrid PP leader Esperanza Aguirre and the former IMF managing director, Rodrigo Rato, now accused of fraud owing to his involvement in the secret credit card scandal at Caja Madrid savings bank.

The mobile phone was one of his key weapons. According to sources consulted by El Mundo, Gómez would always seize the opportunity to get his hands on the phone of whoever he was meeting, on the pretence of uploading a programme or solving a problem, and busily memorise useful numbers.

Thus he was able to boast to his friends that he had called Spain’s former king: “Your Majesty, Juan Carlos, I can solve the problems of Princess Cristina,” Gómez reportedly told the monarch, explaining that he was “negotiating” with one of the private prosecutors in the fraud case involving the ‘infanta’ and her husband, Iñaki Urdangarin. King Juan Carlos’s exact answer is not known.

Claiming to be representing Spain’s deputy prime minister, Soraya Sáenz de Santamaría, Gómez met with Miguel Bernad, who is part of the prosecution against Princess Cristina, and asked him to withdraw his accusations. He even promised Bernad’s companion at the lunch, a Catalan businessman, a nine-million-euro loan from BNP Paribas bank “on fabulous terms”.

Finally, Gómez’s pigeons came home to roost. Cruising around night-time Madrid complete with a bodyguard and a fleet of Audi A-8 cars, he promised businessmen favours, arranging paperwork issues for club owners and the like through his contacts. He also claimed to have access to Spain’s CNI secret service and traded alleged information from this source. He charged up to 50,000 for each deal and moved into a mansion in Madrid’s exclusive El Viso district.

One businessman who was not satisfied that he had been granted the favour required said that Gómez returned the 30,000 he had been paid when a gun was pointed at his head.

A Madrid judge has removed Gómez´s passport but he has been released without bail while the investigation continues.