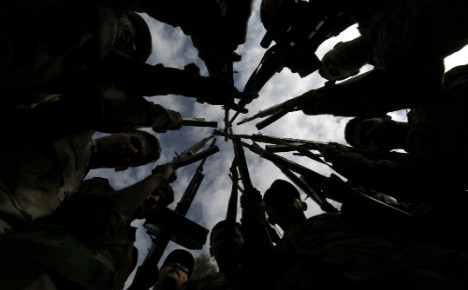 Iraqi Shiite men who have enlisted in the national forces to fight against Islamic State. AFP Photo/Haidar Hamdani

Defense Minister Pedro Morenes made the announcement in Washington, where he met Friday with US Defense Secretary Chuck Hagel.

"We could be starting up by the end of this year because the whole operation is evolving fast, all the time, every day; we have to adjust our abilities and what we are offering, in response to that evolution," Morenes told reporters.

He visited US Central Command in Florida, where he discussed military operations with Iraq and against IS militants.

In Washington, Hagel and Morenes said the two allies would be cooperating on the fight against IS fighters.

Hagel and Morenes also vowed to cooperate against Ebola, which has killed more than 4,500 people mainly in West Africa.

"The two leaders discussed how each of their nations is addressing the virus, focusing on the importance of strict protocols to protect the American and Spanish people," Pentagon spokesman Rear Admiral John Kirby said in a statement.

As such, under a 1952 agreement, Spain will allow US planes to use its bases in Moron and Rota in southern Spain to facilitate the transfer of material and personnel to hard-hit West Africa, Morenes said.

But the bases will also serve American troops deployed to northern Iraq.

A global UN appeal for nearly $1 billion to fight the spread of the disease has so far fallen short, but a spokesman told AFP more funds were coming in daily.

Out of $988 million requested a month ago, the UN said Saturday that $385.9 million had already been given by a slew of governments and agencies, with a further $225.8 million promised.

Symptoms of Ebola include fever, headache, diarrhea, vomiting and in some cases bleeding.

Even if a person is infected, the virus can only be passed on once symptoms appear and only through direct contact with their bodily fluids, such as mucus, semen, saliva, vomit, stool or blood.

There is no licensed treatment or vaccine for the contagious disease, but several countries are trying to develop an effective vaccine.