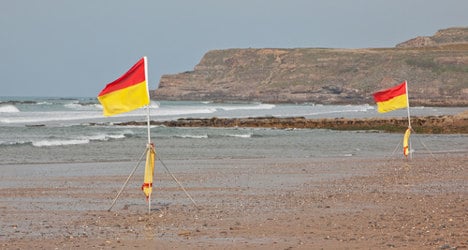 Photo of safety flags on a beach: Shutterstock

Twenty-two year-old Nuria was taking a walk with her mother in the town of Fuengirola on October 10th when she spotted what looked like too men in difficulties on a floating mattress out at sea.

"I wouldn't have been able to sleep peacefully thinking they had died and I didn't do anything," she told local daily Diario Sur of the night in question.

"It wasn't normal. It was nearly 10pm and we saw that they were starting to make signals with red lights and they were next to a buoy," she added, explaining she thought they might have been holding onto the beacon for safety.

"I couldn't calculate the distance, but when I go swimming — and I know how to swim and I'm from here — I don't go that far out," she explained.

Nervous, she contacted local police, but officers dismissed her concerns after the men at sea responded to signals from police with torches with their own.

They would have been shouting of splashing about if they were drowning, police said, in a manner she described as dismissive.

Nuria then enlisted other people on the beach to help her persuade police to act. Eventually the 'reluctant' officers called the coast guard.

After half an hour, a boat and a helicopter arrived on the scene.

Their finding should have been relief: the two swimmers were actually fishermen on a canoe who hadn't noticed all the drama on the shore because they had their backs to the coast.

But after the incident police the details of both the fisherman and Nuria herself.

"I will now have to pay for the ship and the helicopter being sent out;" she told Diario Sur.

If Nuria pays within 15 days, her bill will be €150, but it doubles after that time.

"In the end it's the person who alerts (authorities) who suffers. Is it better to look the other way and prey to God they don't drown. I wouldn't do it," she said.