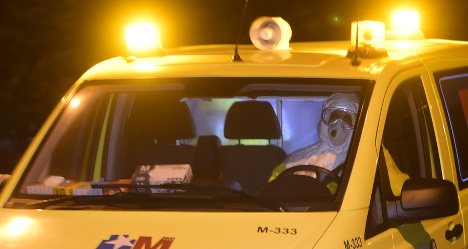 Preliminary tests on four people who were taken to hospitals in Madrid and Tenerife on Thursday suspected of possible infection with Ebola have come up negative, Deputy Prime Minister Soraya Sáenz de Santamaría said on Friday afternoon.

The individuals are a man who travelled in the same ambulance used to transport the nurse Teresa Romero, so far the only person known to have been infected with Ebola in Spain, a passenger who felt unwell on an Air France flight from Paris into Madrid Barajas, a missionary from Madrid who had been working in Liberia, and a Red Cross nurse who developed a fever after returning to Tenerife from Sierra Leone.

The Air France passenger — who developed a shivering fit on Thursday’s flight to Madrid — and the Canary Islands nurse both have malaria, according to blood tests.

All four will have to wait for the results of a second analysis in three days’ time before they can be discharged. The three patients in Madrid are being kept in the Carlos III hospital where Teresa Romero is being treated for the disease and a further 15 people who had had contact with the infected nurse are also being kept in isolation.

In Tenerife the male Red Cross volunteer nurse is being treated in a specially adapted part of the Nuestra Señora de la Candelaria university hospital.

Sáenz de Santamaría, who chairs the Spanish government’s ministerial committee on the Ebola outbreak, said on Friday that Romero was “stable and in slightly better health”.

None of the other individuals who are being kept under observation in Carlos III hospital have developed symptoms, she added.