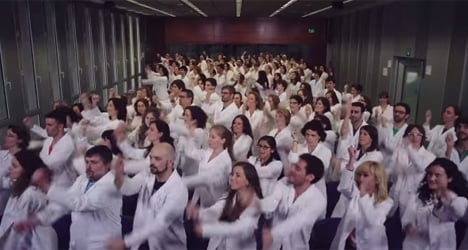 Makers of the five-minute video hope it will engage the public's interest in scientific research by highlighting the role it plays in society. Screen Grab: YouTube/IAB

The bopping boffins at the Institute for Research in Biomedicine (IRB) released a YouTube video this week that shows them dancing through their labs in Barcelona's Science Park and past famous city landmarks.

The five-minute film is sponsored by a number of companies who have agreed to make a donation every time it is viewed.

Anna Merlos, Strategic Projects and Philanthropy Officer at IRB, told The Local, "We wanted to show the human face of scientists, to show the public that they don't just live in labs. They are young people with the same hopes, fears and dreams as everyone else."

Low levels of public interest in Science in Spain are a serious concern to many in the field.

A 2012 study conducted by BBVA revealed that 45.9 percent of Spaniards couldn't name single scientist, living or dead, of any nationality. The result was one of the worst in the developed world.

Merlos said that she hoped that the video and fundraising campaign would help to "engage society" in the research efforts of the Institute.

Joan Guinovart, founder and director of the institute, said in a statement, "This is a pioneering initiative in Europe for a centre devoted to basic research. Using a fun, friendly, and community-spirited approach, we highlight the fundamental role that science plays in society’s well-being."

Despite widespread criticism of reduced science funding in Spain, Merlos emphasized that the IRB scientists had not resorted to dancing for cash.

"This isn't a substitute for public funding. It's an alternative, parallel source of fund-raising that's been used successfully in the USA and UK," she added.

To support the IRB's research into cancer, Alzheimer's and diabetes, you can make a donation via their website.