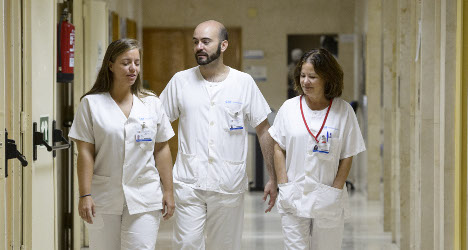 Doctors were not waiting to see if Romero's "lung problems resulting from the illness" disappeared, said José María Echevarría, the head of the virology institute at Madrid's Carlos III university where Romero is being treated.

Her recovery was made more complicated by the fact that the nursing assistant was a smoker, Echevarría told Spain's Antena 3 radio station.

But the virologist added that doctors treating Romero said the health of her lungs was improving.

This improvement was confirmed by Manuel Torres, one of the nurses treating Romero: "The illness is still serious, but she's seen a slight improvement and fingers crossed, things stay that way".

On Wednesday, one of Romero's cousins told journalist that the nursing assistant was "already standing up, sitting down, (and) taking liquids)".

She was "in very high spirits", the family member said.

But in an interview with Cadena SER, Rafael Delgado, head of microbiology at Madrid's 12 de Octubre Hospital urged "caution" because "Ebola is a disease subject to complications" .

Romero contracted Ebola after treating Spanish missionary Manual García Viejo who was flown back to Spain after being infected with the virus in Sierra Leone.

There are now nearly 100 people being monitored after possible contact with the health worker.

This includes 15 people currently in isolation at the Carlos III hospital, including Romero's husband. None of these people have displayed symptoms. A further 83 people are still at home but are being closely monitored.

The latest Ebola outbreak has claimed around 4,500 lives in West Africa and the World Health Organization on said Tuesday that the infection rate could soon reach 10,000 a week.