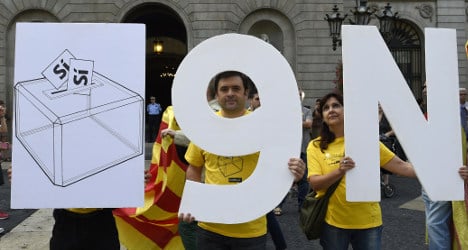 Pro-independence Catalans in Barcelona in September holding placards representing a ballot box and the date of the vote "9N". Photo: Lluis Gene/AFP

Foreigners aged 16 or over registered as living in Catalonia have been given the all-clear to participate in an unofficial poll on whether Catalonia should split from the rest of Spain, to be hold on November 9th.

The vote replaces plans for a referendum which was to be hold on the same day, but which the Catalan government has now scrapped over fears it wouldn't have any legal standing.

The newly announced poll won't have legal validity but allows people to voice their opinion.

Conditions for expats hoping to vote in the poll are almost identical as those outlined for the original referendum, a spokesperson for the Public Diplomacy Council of Catalonia (Diplocat) told The Local.

Under those rules, EU citizens with an NIE document who have been registered (empadronamiento) at their local town hall in Catalonia for at least a year.

For foreigners from outside the European Union, you will need to have been registered for at least three years.

But Diplocat said they believed a requirement to register in advance to take part in the poll would now be scrapped, with foreign voters being able to simply turn up at their polling station on the day with their NIE card.

While Diplocat did not specify that expats would need to also show valid photographic ID, The Local recommends people also bring this along just in case.

On Wednesday, the Catalan government announced there would be no postal voting before the November 9th poll, but people will be able to vote until up to 15 days after the ballot.

The location of polling stations will be announced in the days leading up to the vote, the government said.