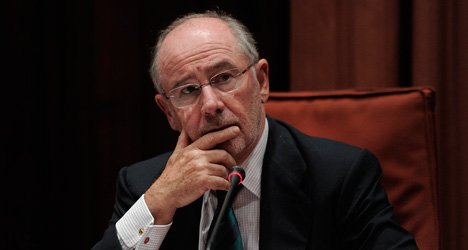 Audit documents submitted by prosecutors to Spain's National Court detailed a total of €15.2 million  ($19.2 million) of spending by former managers of the bailed-out group Bankia, which Rato headed from 2010 to 2012.

Rato, a former Spanish finance minister, was due to be questioned by Judge Fernando Abreu of the National court, Spain's top criminal court, at around 5.00pm.

They face possible charges of misappropriation of company funds and embezzlement.

The prosecution's audit covered a total of 86 users of the credit cards, many of them connected to politics, trade unions and even the royal family, and it has put Prime Minister Mariano Rajoy's conservative Popular Party, which Rato belongs to, on the defensive.

The scandal has also fueled indignation in Spain, where one in four people are out of work, ahead of a general election expected by the end of next year.

The near collapse of Bankia in 2012 caused thousands of customers to lose their savings and pushed Spain to seek a €41 billion international bailout for its financial sector.

Rajoy defended himself in parliament on Wednesday, saying the government had "done everything it should do" to back the investigation of the scandal.

Spain's economy minister have opened a bank account so that executives wishing to return funds can do so, Spain's El País newspaper reported on Thursday.

Depositing cash in that account will not signal culpability.