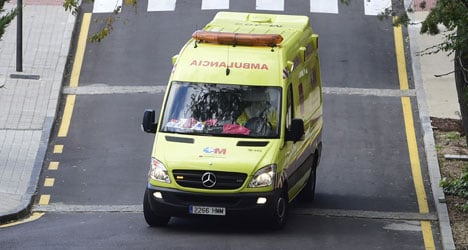 The nurse, one of seven people to travel with Romero in an ambulance when she was taken to hospital, was admitted after suffering from fever, but initial tests show she is negative for Ebola.

She will be now be kept in isolation at Madrid's Carlos III hospital for 72 hours while a second round of tests is carried out to confirm the diagnosis.

Three other people were admitted to Spanish hospitals over Ebola fears on Thursday.

One of those, passenger on an Air France flight who arrived at Madrid's international airport was admitted to Madrid' Carlos III hospital after complaining of Ebola-like symptoms, but has tested negative in a first round of tests.

Doctors are still waiting on test results for a third person, a missionary returned from Liberia.

Separately, on Tenerife in Spain's Canary Islands, a Red Cross worker who had travelled from another affected country, Sierra Leone, was hospitalized, the organization said.

A further 15 people are considered to be at "high risk" but none of them have yet shown any symptoms, according to Spanish daily 20 Minutos.

Fernando Simón, head of the Spanish ministry of health's crisis management team, on Thursday revealed that the patient admitted to Madrid's Carlos III Hospital was one of 68 in the category considered to be at "low risk" of infection.

Simón underlined that the patient's fever was mild and that the admission to hospital was a precautionary measure in line with the protocols established in the wake of the Ebola crisis.

According to the protocol, those in the low-risk category should take their temperature twice a day over a 21-day period. If they register a body temperature of over 37.7°C they should isolate themselves at home and contact emergency services immediately.