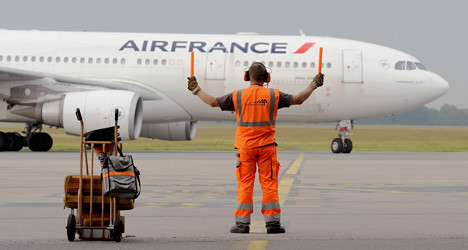 The head of virology at the hospital, José Manuel Echevarría, said the man had tested positive for malaria, El País newspaper reported.

Another person admitted to Carlos III hospital on Thursday — a patient who had contact with the Spanish nurse with Ebola Teresa Romero — has also tested negative for the disease after being admitted with fever.

Doctors are still waiting on test results for a third person, a missionary returned from Liberia.

Separately, on Tenerife in Spain's Canary Islands, a Red Cross worker who had travelled from another affected country, Sierra Leone, was hospitalized, the organization said.

Health officials said on Friday the man was suffering from malaria.

This makes it less likely he is suffering from Ebola but tests will still be carried out at Madrid's Carlos III hospital, they added.

The Air France passenger was admitted to hospital after Spain on Thursday activated emergency health procedures at Madrid's Adolfo Suárez Madrid-Barajas airport when the flight crew reported the passenger's complaints to ground staff.

An Air France spokesperson told The Local the passenger — who was coming from Nigeria and was on a connecting flight from Paris, according to Spanish broadcaster RTVE — had now been isolated for medical checks.

"Initial indications are that it's not a case of Ebola," the airline spokesman told The Local, although he said medical investigations were ongoing.
"We understand the passenger did not have a temperature."
However, Spain's health minister Ana Mato said from Brussels: "It seems that today a passenger had fever on one of the flights". She added she was monitoring the situation closely.
In a press release, Spain's new Ebola crisis team also said the passenger had "febrile" systems, without specifying what these were.
The Air France plane is being kept in Madrid, and disinfected as a precaution, the Air France spokesperson said.
The aircraft is currently at a remote parking by at Madrid airport, and authorities are waiting for at least one ambulance so that the isolated passenger can be transferred to Madrid's Carlos III hospital, news agency Efe has reported.
He will remain at the facility until tests confirming whether has Ebola or not have been carried out, El Mundo have reported.
Carlos III is the hospital where the Spanish nursing assistant with Ebola, Teresa Romero, is currently receiving treatment.
The Air France plane carrying 156 passengers and seven crew members left Charles de Gaulle in Paris at 9.35am and arrived at 11.30am, national daily El País reported.
Passengers on the flight were finally able to disembark at 1.30pm but were unable to take their luggage with them, Catalan daily La Vanguardia reported.
This was now being disinfected and would be delivered to patients at a later time, aircraft personnel said.