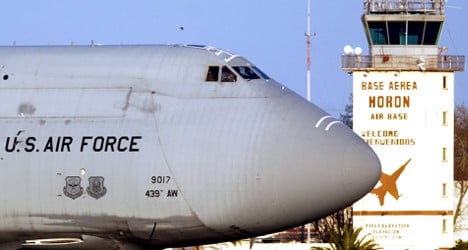 A US Air Force C-5 Galaxy at the Morón de la Frontera military base in Andalusia. File photo: Cristina Quicler/AFP

Under the plans, the US would use the joint Spain–US Andalusian air bases of Morón de la Frontera and Rota as stopover points in its 3,000-person strong mission to fight Ebola in Sierra Leone, Liberia and Guinea.

The virus has already claimed nearly 4,500 lives in the region and the World Health Organization on said Tuesday that the infection rate could soon reach 10,000 a week.

Spanish military health authorities are currently negotiating "strict protocols" for any possible use of the two US air bases in the fight against the virus, Spain's El país newspaper reported.

Spain is nervous about any possible further cases of the disease on its own soil. A Spanish nurse in Madrid contracted the virus after treating a Spanish missionary repatriated from West Africa. She remains in a serious but stable condition and close to 100 people are now being monitored over fears they may also have been infected.

Washington has given strict guarantees that no medical personnel who have had direct contact with patients with Ebola will travel on flights passing through the Andalusian air bases. People suspected of having been infected will also be barred.

Under the proposals on the table, stopovers will only be used for refuelling, loading of supplies and crew rest. Military personnel will not leave the bases, El País reported.

Spain will also reserve the right to allow transit stops on a "case-by-case" basis.

The country is also considering a United Nations request to use airports in the Canary Islands as transit points for medical missions to West Africa, with concerns about the readiness of the island to deal with a possible infection.

The latest death toll is 4,447, from 8,914 recorded cases of infection, Aylward said as the epidemic spirals in the three hardest-hit west African countries of Liberia, Sierra Leone and Guinea.

While the figures suggest a survival rate of 50 percent, they mask the true picture, Aylward said, adding: "What we're finding is 70 percent mortality" in all three countries.

The United Nations was due to hold talks later Tuesday on a public health crisis that the WHO has called the "most severe in modern times".

On Monday, US President Barack Obama and UN Secretary General Ban Ki-moon called for the international campaign against the haemorrhagic virus to be intensified.

Meanwhile a 56-year-old Sudanese doctor who had worked as a UN volunteer in Liberia died of Ebola on Monday night after arriving in Germany last week for treatment.

Facebook co-founder Mark Zuckerberg on Tuesday announced a $25 million donation to the US Centers for Disease Control Foundation to help US efforts to contain the epidemic.