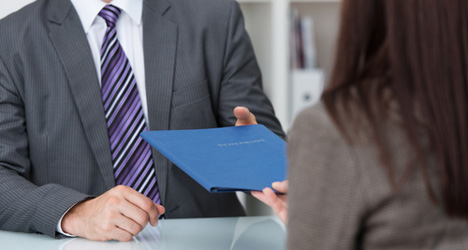 The Supreme Court described the interview questions as a "flagrant" violation of the woman's rights. Photo of job interview: Shutterstock

The woman had travelled to Tenerife from Valladolid in 2009 for a job interview when she was asked about her personal and family circumstances, according to Spanish news website Terra.

The interviewers told her she would find it difficult to find a school on the island for her two daughters and that her husband would struggle to find a job.

They then warned her that they didn't want to employ "anyone who might take maternity leave", which left her feeling compelled to inform them that she had undergone a hysterectomy.

After the interview, the woman was selected to cover the position of another final candidate for the post who had responded to the same questions by telling AENA that she was single and childless.

The sentence was passed in April but details were made public today by the union CSIF.

In the ruling, the Supreme Court stressed that AENA's statements and questions were a "flagrant" violation of the constitutional rights enshrined in Spain's Statute of Workers which prohibit employment discrimination.

They ordered AENA to pay €3000 ($3,800) compensation "for damages and losses due to sex discrimination".

The story comes just two weeks after the head of a top Spanish business association said that she prefers not to hire women aged between 25 and 45.

Mónica de Oriol, the outspoken president of Spain's Business Owners Circle, caused outrage on Twitter after asking, "If a woman falls pregnant and you can't get rid of her for the eleven years after she's had her child, who is a company employing?"