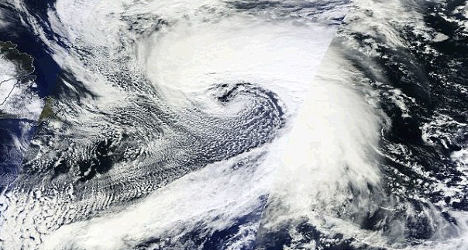 The giant storm has produced waves as high as 15 metres (50 feet) on the open sea. Photo: Nasa

The storm which stretches across most of the Atlantic Ocean from Canada to Spain has produced mega waves towering as high as 15 metres on the open sea, according to the US National Weather Service.

Having formed in the North Atlantic it is now expected to make landfall in Spain in the late hours of Wednesday, Spain's weather agency Aemet warns.

Galicia in the country's north west will be hardest hit, with heavy rain and storms expected.

Some local authorities have already closed parks as cities and towns brace for wild weather and waves as high as 5 metres.

Other coastal areas won't be immune either: Spain's entire north coast could see waves as high as 3 metres, while the Canary Islands could also see high sees, Aemet warns.

The wild weather is expected to last until at least Friday.