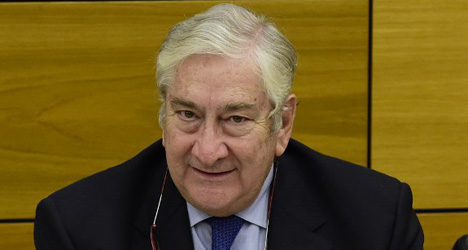 The Ebola-infected nurse's husband told Rodríguez: "She has a willingness to serve others and a humility that you yourself lack." Photo: Pierre-Philippe Marcou/AFP

Romero's husband, Javier Limón, currently in isolation at a Madrid hospital over fear he may have contracted the disease himself, was one of those who called for Rodríguez to resign after the health chief accused the nurse, who was fighting for her life in hospital, of lying.

He went on to make comments like "You don’t need a Masters to learn how to put on and take off a suit" and "Some people are better at learning than others".

Romero contracted the Ebola virus while volunteering to help with the treatment of a repatriated priest.

While in a weakened condition she is reported to have admitted she may have touched her face with the gloves she’d used to treat the Ebola patient, comments which Spanish civil servants union CSIF argue she may have been pressured to make.

Limón responded to the comments in a letter where he wrote: "I entreat you, speaking with the ignorance of a welder, to explain to me how to put on a protective suit, since unfortunately my wife did not get a master’s degree in such matters. Teresa had half an hour or so to learn it from a colleague, but she also has a willingness to serve others and a humility that you yourself lack."

He called on the Popular Party health boss to "show some personal honour and resign."

According to Spanish daily El Pais, Rodríguez has belatedly replied to Romero's husband , saying "I know these are very tough moments for you and your family, and I understand that my words may have caused even more pain."

He described his comments as "unfortunate" in a letter published by news agency EFE but made no mention of resigning, despite having said last week that, "If I have to resign I will. I have no affinity for the position, I’m a doctor and my life is sorted."

Even some within his own party feel that Rodríguez should go. Rubén Moreno, the parliamentary spokesperson on health for Spain's ruling Popular Party, labelled Rodríguez’s accusatory rhetoric as "out of order" and "inappropriate".

In related news, Lucas Domínguez, the head of the veterinary team that controversially put down Romero's dog, has resigned from his post.

He did not give reasons for his decision but Spain's 20minutos newspaper suggested it was over differences of opinion over how to deal with the body of the dead animal.