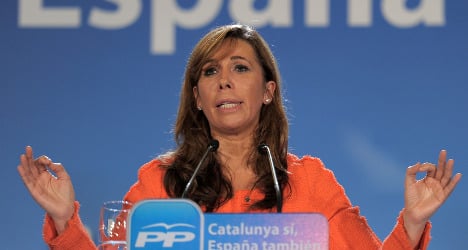 The President of Catalonia Artur Mas unveiled the plans for the non-binding poll on Tuesday, a day after deciding to let go of his original wish for a November 9th vote, amid concerns it would lack sufficient legal standing.

Mas is now hoping to get around that, though, with a new 'consultation' which will still give people a chance in the region of 7.5 million people a chance to voice their opinion on whether they should split from Spain.

The poll won't have any legal weight, despite assertions from the Catalan president that the move is a "a giant step towards a definitive consultation".

In fact, it's a change of course that appears to have satisfied no one, with Mas conceding during Tuesday's two-hour public appearance that his independence bedfellows are not enamoured of the plan.

The first response from the central government in Madrid was far from positive either.

With Prime Minister Mariano Rajoy busy selling Spain's recovery at a business forum hosted by the Financial Times, it was left to PP parliamentary spokesperson  Alfonso Alonso to put the boot in.

"It gave me the feeling he was putting up a smokescreen," Alonso said in comments cited by Catalan daily La Vanguardia.

Everyone knows there won't be a vote on November 9th "call it whatever you like", he added.

Mas is "engaging in a legal con" but knows he can neither "jump over" or "go under" the law," said Alonso.

"At this time, and not to put too fine a point on it, it means president Mas has descended to ridicule," he added.

The head of the Popular Party in Catalonia, Alicia Sánchez-Camacho, meanwhile, said the Catalan independence movement was over and that the new planned consultation "means nothing".

It's a "pretend vote" and a "big survey" with no legal relevance, said Sanchez-Camacho in a press conference.

While conceding such surveys were legal, she said in this case they are simply a means by which Mas hoped to "cheat Catalans" into believing the independence fight is not over.

Asked about the possibility of regional elections which could act as a plebiscite on the independence issue, the PP regional party leader, said the Catalan government should be working towards solving problems and not constantly "threatening elections".

The head of fellow anti-independence party Ciudadanos Albert Rivera also slammed Mas's plans, labelling them "ridiculous" and stressing his party would not get involved in a "fictitious vote".

The head of Spain's major opposition party the socialist PSOE joined the ranks of those blasting the new vote plans in Catalonia.

Mas can't keep cheating Catalan society because it generates frustration and division," he tweeted to his followers.