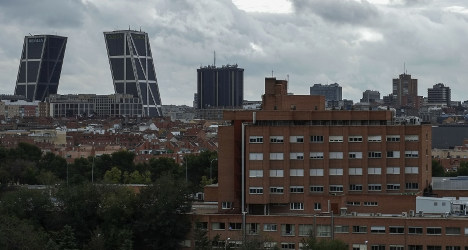 After two "difficult" nights Romero had an easier night on Monday, Spain's ABC newspaper reported a doctor treating her as saying.

Her "fever has dropped several decimal places and she is calm", the doctor told the daily, adding the nursing assistant remained in a serious but stable condition.

Experts have also pointed to the fact that there are grounds for hope now that 15 days have elapsed since Romero was infected with Ebola.

"It's true that, statistically, after a certain number of days with the illness — once you've passed a certain barrier — those who have survived have more chances of coming of getting over (the illness)," Fernando de la Calle, with the Tropical Medicine Unit at Madrid's Carlos III hospital was quoted as saying by El Mundo newspaper.

The following 48 hours were crucial in terms of whether Romero would survive, the daily added.

Meanwhile, there are now nearly 100 people being monitored after possible contact with the health worker, Spain's El País newspaper reported.

This includes 15 people currently in isolation at the Carlos III hospital, a group that numbers Romero's husband and two employees from a salon where Romero went for a beauty treatment. None of these people have displayed symptoms.

A further 83 people are still at home but are being closely monitored.

On Monday, Carlos III hospital director Antonio Andreu said Spain would have beaten Ebola by October 27th if no new cases were recorded before that time.

The current Ebola outbreak has now claimed over 4,000 lives in West Africa.

A UN worker being treated for Ebola in Leipzig died overnight, the hospital caring for him said on Tuesday. He is the first ever victim to die in Germany of the highly-infectious disease.