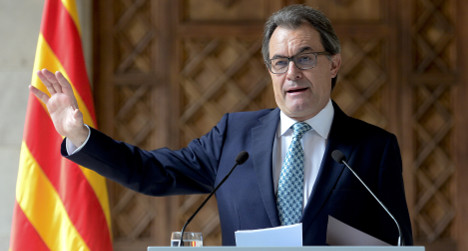 A relaxing looking Mas made the announcement before journalists outside the Catalan parliament.

He said the Catalan government would hold a vote "with urns" and "with ballots" and with everyone over 16 able to vote. Some 20,000 volunteers would run the election stations, he said.

The questions posed will be the same as those designed for the original poll, the Catalan President added.

He described the non-binding vote as "a giant step towards a definitive consultation".

The results would be known on November 10th, he explained, but they would not be definitive, just as the results of the original planned vote would not have been.

Mas's announcement on Tuesday came after his decision on Monday to call off the non-binding vote originally planned for November 9th amid concerns it would lack sufficient legal standing.

On Tuesday, Mas said political consensus in Catalonia was one of the weakest links in the chain, and that links between pro-independence forces were strained, but had not been broken over the last few days.

The parties did not agree on how to respond to the (Constitutional Court's) suspension of the November 9th vote, he explained.
"There is less consensus than before but we are all determined to press on/move forward."
"The other parties have said they don't agree with our strategy for November 9th but that they will support it," he later said in response to a question from journalists.
But "the real adversary is the Spanish State," Mas said.
"It will do anything to ensure that the Catalan people cannot decide on their own future."
"We've always known it wouldn't be easy. We have a very powerful, very intransigent adversary, Mas said.
"We need the people now more than ever. We are more alone against the government. The political consensus is weaker. Success will come from a high democratic citizen participation on 9N."
During his appearance on Tuesday, the Catalan president did not rule out plebiscite-style regional elections.
"This is a legislature for four years. But this can charge according to circumstances. The ability to call elections belongs to the president. I will speak to the parties, " Mas said,
"The parties could change these elections into a referendum if there is a joint list (of pro-independence forces)," he added.
"The possibility of a joint candidature for the elections is still slight but it could grow."
Asked by a journalist if constitutional reform was still a possible third way on the Catalonia issue, Mas replied: "If someone thinks constitutional reform is the answer then they should suggest it, but the (ruling) Popular Party government haven't, so we're talking about nothing."
Spanish Prime Minister Mariano Rajoy on Monday said he was willing to sit down and talk with Artur Mas, but admitted the two hadn't spoken since July.
Rajoy on Tuesday described Mas's decision to scrap plans for an independence vote as "excellent news", comments that came just minutes before the appearance of the Catalan president.