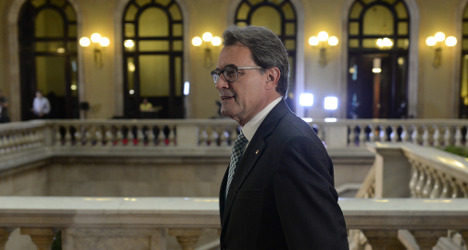 The President of Catalonia Artur Mas is expected to outline his options on the question of independence for the region at 10am on Tuesday. Photo: Josep Lago/AFP

Mas on Monday called off the vote amid concerns it would lack sufficient legal standing.

On Monday, though, after a long meeting, the Catalan government said it was now looking at other options including a "citizen participation" route which would face fewer legal roadblocks.

Mas was expected to speak at 10am on Tuesday to outline those options.

Now Carles Viver Pi-Sunyer, a top figure with the pro-independence lobby, the National Transition Advisory Council, has said Mas should call plebiscite-style elections as a way of pushing forward the independence agenda.

"They have the advantage of being a legal process and are very difficult to prohibit. The president makes the official announcement via a decree, which can't be challenged and the programmes of the parties can't be challenged either," Viver Pi-Sunyer said in an interview with Catalunya Radio on Tuesday morning.

"The (Catalan) parliament had a mandar to cal a vote. (The plebiscite elections) would be a new mandate, which is to create a new State," he explained.

The adviser stressed that a victory of independence parties in such an election would not lead to a new State overnight but would begin the process.

The other two options including going ahead with an 'illegal' vote on November 9th and following the citizen participation route, Viver Pi-Sunyer concluded.