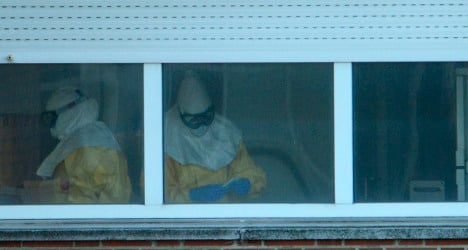 Medical staff at the Carlos III hospital in Madrid on Sunday where 17 patients are under surveillance over Ebola fears. Photo: Pierre-Philippe Marcou/AFP

Concerns that Ebola could spread in Spain have been high since the nurse, Teresa Romero, on October 6th became the first person diagnosed as having caught the deadly haemorrhagic fever outside of Africa.

She is thought to have contracted the disease in late September in a Madrid hospital while caring for a Spanish missionary who was repatriated after he became infected with Ebola in Africa.

The 44-year-old is being treated at Madrid's Carlos III Hospital, which Spain has designated to handle Ebola cases, and her condition "is serious but improving", according to a hospital source.

Fifteen people considered as having had "high risk contact" with Romero, including her husband and two employees at a beauty salon where she went for a waxing, are being monitored at the hospital. None of them have shown any symptoms.

"From a clinical and epidemiological point of view the situation is under control," Carlos III hospital director Antonio Andreu said in an interview with radio Onda Cero.

"It is very important to highlight that all of the contacts classified as high risk, that is the 15 people who are quarantined at the Carlos III hospital, do not have fever," he added.

"The science is very clear. The period of incubation of the disease ranges from a minimum of two days and a maximum of 21 days. If after 21 days from the last contact someone does not show any clinical signs of the disease, we can be 100 percent sure that there is no contagion.

"The date we all have in mind is October 27, which is the day when all those who have been in contact with Teresa who are now under surveillance… will have fulfilled these 21 days, therefore the situation will be totally free" of the risk of contagion," he said.