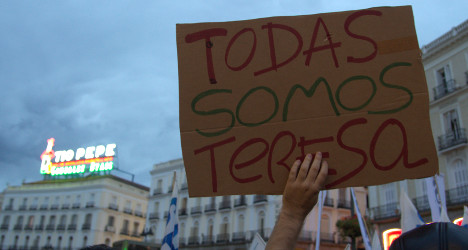 A protester holds a placard reading "We are all Teresa" at a demonstration supporting Spanish nurse Teresa Romero infected with the deadly Ebola virus in Madrid on Saturday. Photo: Curto de la Torre/A

Teresa Romero remained in a serious condition, public health professor Fernando Rodríguez Artalejo said in a press conference on Monday, adding that none of the other people currently under observation at Madrid's Carlos III were displaying symptoms.

"There is nobody capable of transmitting Ebola in Spain. We are in a situation of complete calm," added Rodriguez, one of the scientists selected to advise the Spanish government's new Ebola management team.

"While we don't know a lot about this virus, we know that we have the tools to beat this outbreak. We trust that we within a reasonable time frame — don't ask me about dates — we can control this virus," Rodríguez said.

The health of Teresa Romero took a turn for the worse on Sunday night with "certain" lung problems causing doctors the most concern, RTVE reported.

"She had a very bad night and it has been very complicated for her," according to the broadcaster.

The news comes after the director of the Spanish ministry of health's emergency management team Fernando Simón said there were "signs of hope" for Romero. He stressed however that the nursing assistant remained in a critical condition.

"We must be highly cautious since this is someone infected with Ebola whose situation remains critical and it is possible that other organs are affected," he said.

Spain's El Mundo newspaper reported on Monday that Romero was "fighting like a wild boar" in her bid to beat the virus.

Sources within the hospital told the daily the nurse was also doing as much as she could to prevent nurses and doctors from having to enter the hospital room where she is currently in isolation.

If a pillow is at the foot of the bed "she gets it and puts it back at the head" of the bed, those sources are reported to have said.

"It seems stupid but with these gestures we can see she'd well, knows what's happening and is working with us. The fact she's fighting raises our spirits a lot. She's a fighter," a nurse told the newspaper.

Romero may be treated with the medication ZMab, one of the agents used to produce the experimental drug ZMapp, global supplies of which have dried up.

Romero is thought to have contracted the disease in late September in a Madrid hospital while caring for a Spanish missionary infected with Ebola in Africa who later died.

Romero has said she thought she might have developed Ebola after brushing her face with a glove — pointing to possible gaps in the safety protocols in hospitals treating Ebola patients.

A health care worker in the US state of Texas who treated an Ebola victim has also tested positive for the deadly virus, dealing a blow to the global battle to stem the epidemic and sparking questions about safety precautions.

Top US health officials have said a breach of protocol was to blame for the new Ebola case — which if confirmed would be the second diagnosed outside Africa and the first contracted on US soil.

Her case has sparked an investigation by the US Centers for Disease Control and Prevention (CDC), and a hunt for more health care workers who may have been exposed to the dangerous virus.

More than 4,000 people have died of Ebola since the start of the year — most of them in hardest-hit Guinea, Sierra Leone and Liberia — and the epidemic appears to be outpacing efforts to fight it.

"We are deeply concerned by the news that a health care worker in Texas has tested preliminarily positive for infection with Ebola virus," CDC chief Tom Frieden told reporters.

David Lakey, commissioner of the Texas Department of State Health Services, insisted that authorities were "working with extreme diligence to prevent further spread."