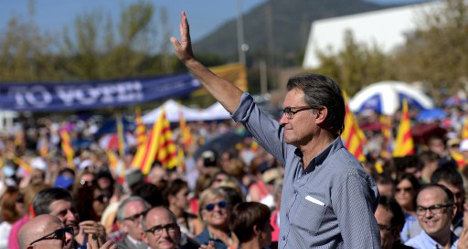 The President of Catalonia Artur Mas waves to the crowd in Manresa on Sunday. Photo: Josep Lago/AFP

Update: Mas on Tuesday said the region would stage a public consultation on November 9th within current legal frameworks. Click here to see the latest news.

Mas has given up on plans to hold the non-binding poll on whether the region should split from the rest of Spain because of a lack of legal guarantees surrounding the vote, Spain's influential El Pais newspaper reported.

Spain's conservative central government has repeatedly said the non-binding referendum is unconstitutional and the country's Constitutional Court has suspended it while it deliberates on its legality.

After a gruelling meeting with leaders from pro-independence political parties in the region on Monday, Mas has now decided to follow a route of "citizen participation" to establish how Catalans see the future of the region — something that would be allowed by the Constitutional Court, according to El Pais.

Such a process, however, would lack any international legal standing and is deeply unpopular among the supporters of the pro-independence vote, the daily said.

Other Spanish news outlets also reported that Mas had conceded the November 9th referendum could no longer take place under the terms set by a regional decree signed by Mas in late September, and spoke of alternatives included "processes of citizenship participation".

"The (regional) government has determined that the consultation can't take place," Joan Herrera of the leftist Initiative for Catalonia party told reporters following the meeting of pro-referendum Catalan parties.

Alternatives would be laid out on Tuesday, he added, with the Catalan government saying Artur Mas would speak publicly at 10am to outline options.

The pro-independence ERC was quick to slam the change of direction by Mas and his government.

"We warn there is only way ahead: the Catalan parliament must draw up a Declaration of Independence immediately," the party said in a statement, quoted by the Spanish edition of the Huffington Post.

"They (the Catalan government) are imposing a new scenario on us, one that we in no way agreed to," the party added.

Proud of their distinct language and culture, residents in the northeastern region have long complained they get a raw deal from the government in Madrid, which decides how their taxes are spent.

They have been fired up by last month's independence referendum in Scotland, even though voters there rejected a separation from Britain.

The region accounts for about a fifth of Spain's economy, but has been hit hard, like much of the country, by the recent years of recession.

But an October 5th poll showed only 23 percent of Catalans supported the idea of forging ahead with the referendum and 45 percent wanted the regional authorities to comply with the stay ordered by the Constitutional Court.

Prime Minister Mariano Rajoy also reached out to Catalans on Spain's national day on Sunday to stress the common "deep roots" that Catalans shared with other Spaniards.

In a comment published in the Catalan language edition of El Pais newspaper, the conservative leader said his government was ready to build "bridges" in its negotiations with Catalans.

But in an informal chat with journalists, Rajoy admitted he had not spoken to Mas since July.