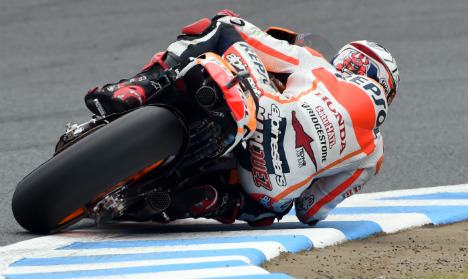 "Two years in MotoGP, two titles. It's incredible," the 21-year-old Honda rider told reporters. "I couldn't have imagined it. Maybe to people it looked easy because I am always smiling and always happy, but also I feel pressure."

Marquez, who last year became MotoGP's youngest world champion, celebrated in flamboyant fashion, accepting a ceremonial sword from a samurai warrior and a golden helmet from a kimono-clad beauty emblazoned with his number 93 and "world champion", which he wore on his lap of honour.

Lorenzo won at Motegi on his Yamaha as he did last year, finishing in 42 minutes 21.259 seconds to back up his victory at Aragon two weeks ago, with Marquez behind him and Valentino Rossi third for Yamaha.

Marquez's second place gave him an unassailable gap of 82 points from Rossi and Honda team-mate Dani Pedrosa with three races remaining this season.

"I had the chance to keep the party open for the championship for another week," said seven-times premier class champion Rossi, who had fought tooth and nail to prevent Marquez passing him nine laps from the end at Motegi's Twin Ring circuit.

"I tried the maximum. Unfortunately it was not enough."

Had the Italian managed to hold onto second, Marquez's celebrations would have been put on ice, at least until the next race in Australia.

Starting from fourth on the grid with Rossi and Pedrosa ahead of him, Marquez made steady progress before blowing past Rossi at the second attempt to wrap up the title.

The Catalan began the season with 10 straight race wins from the curtain-raiser in Qatar before that streak ended in the Czech Republic in August, but he quickly returned to the top of the podium two weeks later in Britain.

The Japanese race took place in cloudy conditions but escaped rain, despite fears an approaching typhoon could cause disruption similar to last weekend's Japanese Formula One race at Suzuka, which was halted after a horror crash involving France's Jules Bianchi.

Lorenzo lavished praise on Marquez after the race.

Marquez also became the youngest ever rider to win two consecutive premier-class world championships, taking the record from Mike Hailwood, who was 23 when he won his second 500cc title in 1963.

"It was really difficult to keep that (performance) level and concentration because people are waiting for you and expect a lot of things from you," said Marquez, acknowledging that 2014 had been tougher than his rookie year.

"The pressure was really high. But with more experience, it became a little easier. Of course I want to win more and more. For a rider, you can never win enough. We will look forward to improve our level next year."