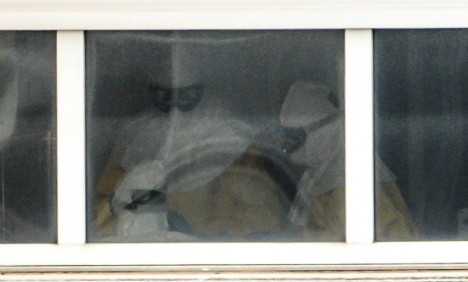 Travellers were screened and safety drills were carried out as a UN official just back from west Africa warned the disease, which has killed more than 4,000 people there, was outpacing efforts to fight it.

"The virus is far ahead of us and every day the situation gets worse,"  the head of the United Nations' emergency Ebola mission Anthony Banbury, told UN leaders after a tour of Liberia, Guinea and Sierra Leone, the nations worst hit by the epidemic.

"Collectively we must stop the spread to other countries and ensure that countries are prepared to rapidly detect, control, and eliminate the virus if it is introduced."

A suspect case was ruled out in Brazil, where a Guinean man tested negative for Ebola, the health ministry said, but fears of contagion persisted in Europe.

Attention there focused on Madrid-based nurse Teresa Romero, 44, the first person diagnosed as having caught the disease outside Africa.

Spanish government officials were locked in a meeting on Saturday to coordinate their response to the crisis.

Romero's condition "improved in the night. She is conscious and talks from time to time when she is in a good mood," a hospital source told AFP.

Her condition "is serious but is improving", the source said.

Sixteen other people, mostly hospital staff, are under observation at the Carlos III hospital where Romero is being treated. The hospital said one of them was expecting final test results and could be discharged Saturday.

There is still no vaccine or widely available treatment for Ebola, but ZMapp, made in California, is one of several drugs that have been fast-tracked for development.

Romero is thought to have contracted the disease in late September in a Madrid hospital while caring for a Spanish missionary infected with Ebola in Africa who later died. The WHO said 4,033 people have died from Ebola as of October 8th out of a total of 8,399 registered cases in seven countries.

The sharp rise in deaths came as the UN said aid pledges to fight the outbreak have fallen well short of the $1 billion (€800 million) needed.

The Spanish health ministry on Friday called on citizens "to continue their daily activities normally," after a series of hoaxes fuelled fears of wider contagion.

Police said on Saturday they had arrested a man in the southern Spanish city of Cadiz who they said had triggered a safety alert by pretending to have Ebola symptoms.

Officials at the Madrid hospital insisted there was no risk of infection from patients under observation, including Romero's husband, who were photographed leaning out of the windows of their hospital rooms. Britain held a nationwide exercise on Saturday to test its preparedness for an Ebola outbreak.

The eight-hour exercise featured actors pretending to be infected with Ebola plus medical staff treating them at undisclosed locations around the country.

Britain and the United States have boosted screening at major airports such as London Heathrow and JFK in New York.

In Latin America, Peru and Uruguay have announced similar airport measures and Mexico and Nicaragua planned to tighten controls of migrants heading for US soil as an Ebola precaution.

The Canadian government advised its citizens to leave the west African countries most affected by Ebola. It took measures at its own borders to screen for potentially exposed travellers. The United Nations and leaders of Guinea, Liberia and Sierra Leone pleaded for greater help on the frontline of the disease in Africa.

UN Deputy Secretary General Jan Eliasson said only a quarter of "the one billion dollars sought" to combat the disease had been pledged. He appealed for doctors, nurses and other healthcare personnel to come forward.

The president of Guinea met Friday with International Monetary Fund head Christine Lagarde, who promised the organisation was "ready to do more if needed."

Ebola concern spread to the sports world, with hosts Morocco calling for the January-February 2015 Africa Cup of Nations to be postponed, but the African Football Confederation said the schedule would not be changed.