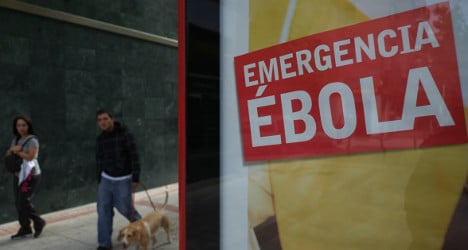 The committee to be headed up Spanish Deputy Prime Minister Soraya Sáenz de Santamaría will be supported by a group of scientific advisers.

"This is a flexible council and we will be able to bring in more people, more experts," Sáenz de Santamaría was quoted as saying in Spain's El País newspaper.

"We believe this is the best time to create this commission because our task, and that of Spain's regions, is to work in the most coordinated fashion possible," she said.

"The priority is to reinforce the information given to the public, because the illness is little known, and our task is to let people know how you get Ebola and how you don't," she added.

The decision to set up the crisis comes after Spain's major opposition party, the socialist PSOE suggested the move.

It also sees Spain's deputy prime minister take the reigns from health minister Ana Mato who has been heavily criticized for her handing of the current Ebola situation in Madrid, with health workers calling for her resignation.

In related news, after visiting the hospital where the Spanish nursing assistant with Ebola Teresa Romero is being treated, Spain's Prime Minister Mariano Rajoy warned of a "complex and difficult" situation after a Madrid nurse was infected with the deadly Ebola virus.

"Lots of people are working here at a moment that we all know is complex and difficult," Rajoy told reporters, but added that he was "absolutely convinced" everything necessary would be done to overcome the crisis.