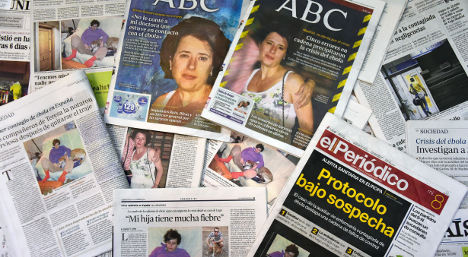 Javier Rodríguez’s comments on different Spanish media on Thursday have angered a large part of the Spanish population and even caused divisions within his party, Spain’s ruling Popular Party (PP).

The 70-year-old official pointed the finger of blame at Tereso Romero, the Spanish nurse who contracted the virus after volunteering to help with the treatment of one of the repatriated priests with Ebola who had been working in Sierra Leone.

Madrid’s health boss was referring to Romero’s delayed admission that she had touched her face with the gloves she’d used to treat the Ebola patient, comments which Spanish civil servants union CSIF argue she may have been pressured to make.

The union also said she "was in no fit condition" health-wise to be quoted either.

But Rodríguez carried on digging his own grave with remarks such as "you don’t need a Masters to learn how to put on and take off a suit" or "some people are better at learning than others".

The detachment with which the health minister has referred to a woman fighting for her life has touched a nerve with many Spaniards who feel the Popular Party’s handling of the Ebola crisis has been accusatory and amateurish.

Even the putting down of Romero’s pet dog Excalibur on Thursday sparked protests and widespread international condemnation given that there is no scientific proof yet that dogs can give humans the deadly disease.

Rodríguez and his counterpart national Health Minister Ana Mato (seen above) have faced calls from the general public to resign but the 70 year old has voiced his disregard for those demands as well.

“If I have to resign I will. I have no affinity for the position, I’m a doctor and my life is sorted,” he told Spanish radio station Cadena SER.

Rubén Moreno, the Popular Party’s Parliamentary spokesperson on health, has labelled Rodríguez’s accusatory rhetoric as "out of order" and "inappropriate".

The head of Spain’s Nursing Council Maximo González even went as far as saying Rodríguez “must have serious mental health issues” as his claims that the infected nurse was lying “were impossible to understand”.

The overall opinion of political and health representatives who have spoken out against the discredited minister is that the focus should be on curing Romero rather than using her as a scapegoat, keeping in mind that on Friday her condition was described as "critical".

Ebola is transmitted by close contact with the bodily fluids of a person who is showing symptoms of infection or who has recently died of the virus. Symptoms include fever, aches, vomiting and diarrhoea.

Spain's Prime Minister Mariano Rajoy has said officials are investigating how Romero managed to get infected.

Rodríguez did initially admit on Wednesday that "something had not worked" properly in the health safety protocol that were meant to prevent Ebola infections.

He then decided to lambast Romero for causing the government "a headache" and a lot of money.

Spain’s opposition PSOE party have argued that the fact the governing PP have since changed Ebola protocols is an implicit recognition that their handling and prevention measures hadn't been strict enough.

The Socialists have also called for a crisis committee of ministers to be set up and led by Rajoy to coordinate the response and inform the public.