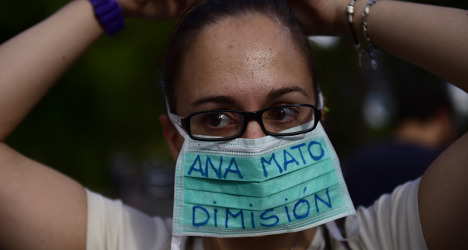 A health worker demands the resignation of Spain's health minister Ana Mato outside the Carlos III hospital in Madrid on Wednesday in the wake of the Ebola virus situation in Spain. Photo: Pierre-Phil

One of the two doctors, Juan Manuel Parra, is the only medical practitioner who cared for Teresa Romero for the entire 16 hours at Madrid's Alcorcón hospital on Monday. He had direct exposure to the patient's bodily fluids and asked to be admitted to hospital.

In an internal letter to hospital authorities and obtained by major Spanish newspapers Parra said the sleeves of his scrubs has been too short.

Parra said that. like Romero, he only found out the nurse he had been treating was positive for Ebola via the media.

The third new patient is a nurse who had contact with one of the two Spanish missionaries who died from Ebola after being repatriated from west Africa for treatment.

"He is showing symptoms and a test has been carried out but we have not received the result yet," said a spokesman for the Madrid hospital.

Meanwhile, two people who had previously been under observation in hospital have been cleared of the disease and discharged.

In total, there are therefore seven people isolated in the Madrid hospital La Paz-Carlos III on Wednesday evening — the three new patients; the infected nurse; her husband and two other nurses.

The infected nurse, identified by Spanish media as Teresa Romero, had cared for the two elderly missionaries who died from the virus.

Officials said they were monitoring as a precaution about 50 other people — mostly health staff — who had been in contact with the infected nurse.

Earlier Wednesday, Health Minister Ana Mato said that there were no signs that any of the woman's coworkers had also become infected.

"At the moment we have no evidence that any of them have any symptoms," she told journalists.