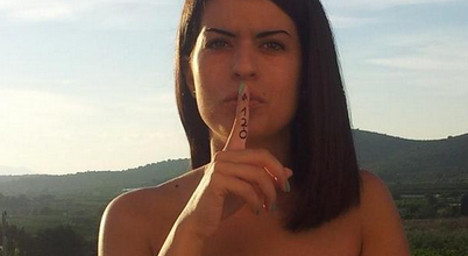 Sandra Boix wrote “Nobody shuts me up” under the eye-catching photo posted on Twitter, using the hashtag “Catalonia’s silent majority talks” to refer to Catalans who want to stay part of Spain rather than live in a separate Catalan state.

The PP Youth Division affiliate also wrote “12-O” on the finger covering her mouth, in reference to the planned October 12th protest against Catalan independence, which will also mark the occasion of Spain’s National Day.

According to online daily Libertad Digital, other Popular Party supporters and Spanish nationalists have applauded Boix’s move, some even copying the ‘hush, hush’ gesture  in photos posted on Twitter.

Although a similar anti-independence protest was held in Barcelona in 2013, Catalonia’s plans for a November 9th vote on independence means this year's event is likely to draw more protesters than last year’s (30,000 participants according to city officials, 160,000 according to the organizers).

The term “silent majority” has been regularly employed by Spain’s ruling Popular Party to refer to sectors of the Spanish population who choose not to take to the streets despite being opposed to a certain cause or movement that does protest (often against the PP itself).

It was used by Prime Minister Rajoy in September 2012 to refer to those who didn’t support a nationwide strike but weren’t speaking up about it and more recently when talking about Catalans who don’t want to break away from Spain.

According to the PP, these people’s opinions aren’t being heard enough in the country’s press, be it because of their unwillingness to protest or because pro-independence demos get all the media attention.

If November 9th’s consultation on independence is held, it would potentially provide a more accurate account of how many people in Catalonia are for and against independence.