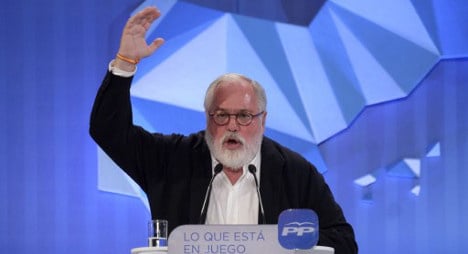 Spain's former agriculture minister was given the all-clear to take on the role by the European Parliament on Wednesday after clearing hurdles including allegations of possible conflicts of interest over family holdings in oil firms and sexism.

Juncker put Cañete's name down for the role on September 10th but a recent confirmation hearing saw the controversial Spaniards repeatedly forced to deny accusations of a conflict of interest after having sold his shares in two oil firms shortly after his nomination to the energy job in September, while his son resigned from the board of one company.

Cañete then failed to respond to questions from green and left-wing groups about the involvement of his brother-in-law Miguel Domecq in oil firms.

He was also taken for handing in a revised declaration of assets to the European Commission at the last minute — an act which delayed his confirmation until Wednesday as the EU's legal team scoured the document.

But Cañete can now relax, with the definitive vote naming him in the climate and energy job to take place in Strasbourg on October 22nd.

Despite a strong campaign against the Spanish MEP — some 300,000 people signed an online campaign asking for him to be dumped — insiders have claimed his hold on the job was guaranteed  because of a pact of non-aggression over his appointment which would see him confirmed by the left if the conservatives said yes to the French candidate for economic affairs commissioner Pierre Moscovici.

Moscovici can also be expected to be named on October 22nd.