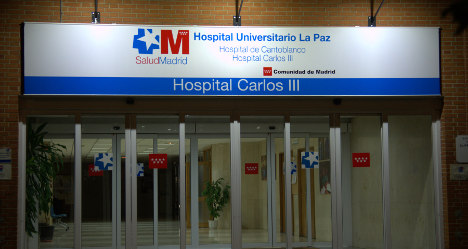 La Paz–Carlos III hospital in Madrid where 14 people are in quarantine as a precaution following the admission of Spanish nurse Teresa Romero. Photo: DYDPPA/AFP

The drug, produced by the Canadian firm Defyrus is one of the agents used of the experimental ZMapp, global supplies of which have dried up.

Spanish national broadcaster RTVE initially reported in error that Romero would be treated with ZMapp.

Romero is currently in a "critical but stable" condition, sources at the Madrid hospital where she is being treated are reported to have said on Friday morning.

Those sources also dismissed reports from medical unions that the nurse was intubated, They added Romero had not suffered multiple organ failure.

Earier, the director of health for the Community of Madrid with Spain's ruling Popular Party, Javier Rodríguez had described the nurse as being in a "very critical" condition.

On Wednesday, the Madrid regional president Ignacio Gonzalez told parliament the nurse, so far the only person to have been diagnosed after catching the disease outside Africa "was at this time very ill and her life is at serious risk as a consequence of the virus,"

A spokeswoman for the La Paz-Carlos III hospital where Romero is being treated had told reporters earlier: "Her clinical situation has deteriorated but I can't provide more information," because of the express wishes of the patient.

The nurse, Teresa Romero, helped treat two elderly Spanish missionaries who died after returning from west Africa with Ebola in August and September. She tested positive for the disease on Monday.

Her case has heightened concerns that the worst epidemic of Ebola on record could spread from west Africa, where it began late last year and has killed nearly 3,900 people, mostly in Liberia, Sierra Leone and Guinea.

Romero, 44, had gone on leave after the second of the missionaries died on September 25th. Authorities said she did not leave Madrid.

She started to feel ill on September 29th but was not admitted to hospital until seven days later, during which time officials fear other people may have been exposed.

Romero had been receiving injections with antibodies extracted from the blood of Ebola virus survivors, hospital officials said earlier this week.

Romero said in a newspaper interview published Wednesday that she thought she might have caught the deadly virus by touching her face with an infected glove after cleaning the room of one of the missionaries who died from Ebola.

Six other people have been admitted to the hospital as a precaution, including Romero's husband and several health workers, the hospital said.

Health officials said they would monitor about 50 other people — mostly health staff — who had been in contact with the infected nurse. They will be monitored for 21 days, the maximum incubation period for Ebola.

The nurse's family dog — a mixed breed mutt named Excalibur — was put down on Wednesday as a precaution, triggering an uproar from animal rights activists.

Ebola is transmitted by close contact with the bodily fluids of a person who is showing symptoms of infection or who has recently died of the virus. Symptoms include fever, aches, vomiting and diarrhoea.

The regional health minister Javier Rodriguez, a member of Gonzalez's administration run by Spain's ruling conservative Popular Party, admitted on Wednesday that "something had not worked" properly in the health safety protocol that were meant to prevent Ebola infections.

The opposition Socialist Party called for a crisis committee of ministers to be set up and led by Rajoy to coordinate the response and inform the public.

"It is important that this committee give daily and timely information to all citizens and all the authorities about the situation and development of the disease and the fight against it," the party's parliamentary spokesman Antonio Hernando told lawmakers.