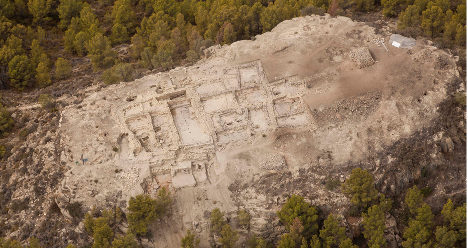 An eagle-eye view of the site where Barcelona archaeologists have discovered the remains of a government-style hall with benches capable of seating 64 people. Photo: UAB

The team from the Autonomous University of Barcelona (UAB) carried out their investigations at La Almoloya in Murcia, the cradle of a Bronze Age civilization known as El Argar.

Although the site was initially discovered in 1944, this team of architects now say they've unearthed the remains of a government-style hall with benches capable of seating 64 people around a ceremonial fireplace and a podium from which the speakers of the day would have addressed the crowd.

Other findings include the remains of a 300-square metre residential complex, dozens of tombs and a palace packed full of metals, stones, bones, fabrics and ceramics; all in exceptional condition.

According to Catalan daily La Vanguardia, the UAB archaeologists are convinced that this Bronze Age parliament is the oldest found in Western Europe so far, dating it back to between 2200 and 1550 BC.

The only other structures with a similar design from that period have been discovered in the Middle East.

As their investigation develops, the team hopes to shed more light on how El Argar’s leaders governed over their people, a population which is said to have flourished due to their knowledge of metallurgy.