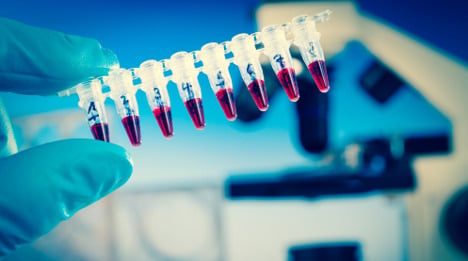 Among the six people hospitalized are the husband of the nurse with Ebola, considered at "high risk". Photo of blood samples: Shutterstock

In the latest case, a nurse was quarantined at Madrid's La Paz-Carlos III hospital on Wednesday morning as a precaution, a spokesman for the hospital said.

Another nurse had been admitted to the hospital with a fever on Tuesday night and put in quarantine for monitoring, he added, confirming Spanish media reports.

Three other people had been placed in quarantine at the hospital for monitoring after a nurse who works there was diagnosed with Ebola on Monday in the first case of transmission of the disease outside of Africa.

The woman, identified by Spanish media as Teresa Romero, a woman in her forties, had cared for two elderly Spanish missionaries who died from the virus following their return from west Africa.

Among the six people hospitalized was the woman's husband, considered at "high risk".

Officials said they were monitoring as a precaution 52 other people — mostly health staff — who had been in contact with the infected nurse.

Health Minister Ana Mato said that there were no signs that any of the woman's coworkers had also become infected.

"At the moment we have no evidence that any of them have any symptoms," she told journalists as she arrived in parliament on Wednesday.