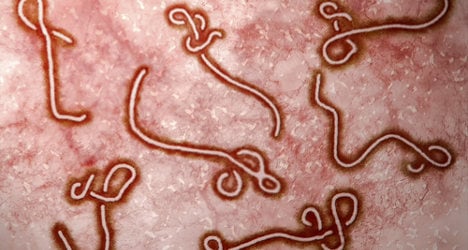 The official admitted the existence of "weak points in the procedures for applying the protocol" for treating Ebola.

One of the theories being looked at was whether there had been a failure of protocol at the moment at which the nurse, Teresa R. R. had removed her protective clothing.

London-based professor in global health Peter Piot has suggested this as a cause, describing the moment of removing the suit as "very dangerous".

"One is covered in sweat, you take off your glasses and you rub your eyes, and this can be the end," he said.

But Simón said other possibilities being looked at included a puncture in the clothing or contact with bodily fluids.

Forty -year-old nurse Teresa R. R. began to feel ill on September 30 while on leave after treating the two patients in the isolation unit of Madrid's La Paz-Carlos III hospital. But she did not go to hospital until Sunday — five days later — complaining of a fever, government officials said.

She is now being treated herself in the same unit.

Asked where she was during this time, her husband Javier Limon told daily newspaper El Mundo: "At home, mainly."

The nurse, who is being treated in isolation at the Madrid hospital where she worked, told the newspaper she was feeling "a bit better".

Asked by the newspaper if she knew how she could have contracted the virus,  she said: "I don't know what to say, I don't have any idea."

Health officials said they were trying to find out who she came into contact with, and were monitoring 30 people, including co-workers and her husband, for Ebola symptoms.

The infection also sparked questions about how safety procedures were applied when treating the two missionaries.

The nurse had treated Spanish priest Miguel Pajares, 75, who was infected with Ebola in Liberia and died on August 12, as well as Manuel Garcia Viejo, 69, who was repatriated from Sierra Leone and died on September 25th.

Pajares was the first patient in the current Ebola outbreak to be evacuated to Europe for treatment.

The infected nurse is believed to have contracted the virus six weeks later while caring for Garcia Viejo, whose room officials said she visited twice, once to treat him and once to clean the room.

Both missionaries were treated in the isolation unit at the hospital, and the medical team that cared for them were closely monitored.

On Tuesday, Spanish Prime Minister Mariano Rajoy called for health professionals to be allowed to do their work, and reminded MPs that Spain's health system was among the best in the world.

"We will get past this," he said of the situation, promising "total transparency" in regards to the issue.

In Brussels on Tuesday an EU spokesman said the European Commission had written to the Spanish health ministry demanding an explanation.

The case followed a wake-up call on Ebola from US President Barack Obama, who warned on Monday that "some large countries are not doing enough" to tackle the epidemic.