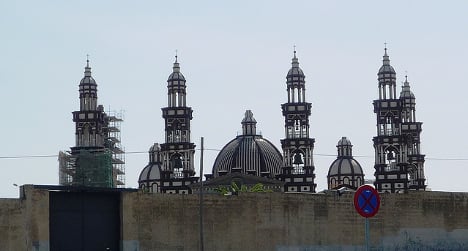 El Palmar de Troya was built on the exact spot where, in 1968, four schoolgirls claimed the Virgin Mary appeared before them. Photo: Martin Haisch

A non-official church in the Andalusian town of Utrera has decorated its façade with ten new flamboyant statues of ‘saints’, including an effigy of Spain’s former fascist leader, dressed in military gear and with a golden halo hanging over his head.

But this after all is no ordinary church.

El Palmar de Troya was built on the exact spot where, in 1968, four schoolgirls claimed the Virgin Mary appeared before them.

Known as the Christian Palmarian Church of the Holy Face Carmelites, this schismatic branch of Catholicism and its raison d'être were never recognized by the Vatican, leading local accountant Clemente Domínguez to proclaim himself Pope Gregory XVII in 1978.

As if things couldn’t get any weirder, their calendar of saints’ days include Saint Adolf (in honour of Hitler) as well as Saint José Antonio Primo de Rivera, Saint José Calvo Sotelo and Saint Luis Carrero Blanco, all fascist figureheads before and during the years of Franco’s dictatorship.

The Palmarians initially managed to gather considerable support by harnessing the discontent of their followers with certain aspects of traditional Roman Catholicism.

A flurry of donations from home and abroad paved the way for the building of their lavish church, where followers would gather to watch Pope Gregory XVII go into a trance.

According to the Spanish edition of the Huffington Post, their popularity has waned since the death of their ‘Pope’ in 2005, but the group have carried on adorning their sanctuary with costly and bizarre decorations thanks to the sale of 3,000 square metres of land in the heart of Seville.