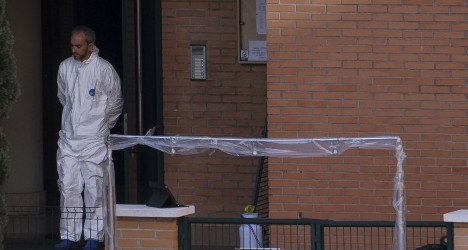 A member of a sanitation team wearing a protective suit near the residence of Teresa, a Spanish nurse, and her husband Javier Limón on Wednesday. Photo: Pedro Armestre/AFP

Health officials say Teresa Romero twice entered the room of Spanish missionary Manual Garcia Viejo — once to clean him and the second time after he died on September 25th, just days after being repatriated from Sierra Leone.

Doctor German Ramirez of Madrid's La Paz-Carlos III hospital said Romero told him she remembers she touched her face with her gloves as she removed her protective suit after leaving the quarantine room at the hospital where the missionary was being treated.

"It is possible that this was not a mistake as such. It could simply be an accident and logically, probably, she could not remember at the beginning because of the state of her health."

Romero had said in an interview published in El Mundo on Wednesday that she had "no idea" how she could have contracted the virus.

But in an interview Wednesday in El Pais newspaper she said: "I think the mistake was in taking of the suit. I see it as the most critical moment, in which  it could have happened, but I'm not 100 percent sure," she told the daily, who described her as sounding "very tired".

Investigators would not be unable to review footage of Romero's actions, however, as cameras were not recording, the paper reported on Thursday.

Romero also said on Tuesday she only found out she had Ebola from the media.

"I asked the doctor for the results and he didn't want to say anything. I grabbed my mobile phone and I saw in El País (newspaper) that they'd written I had Ebola, but nobody told me," the nurse said, speaking to Spanish television channel Cuatro.