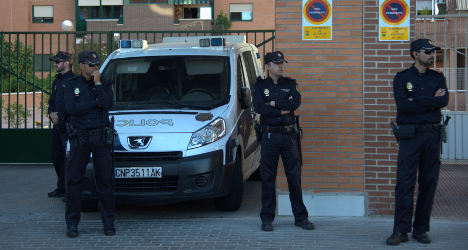 Police stand outside the Madrid residence of Spanish nurse Teresa R. R. after she was admitted to a Madrid hospital with the deadly Ebola virus. Photo: Curto de la Torre/AFP

The husband, Javier Limón, who has been placed in quarantine, contacted local media to object to the decision by Madrid's department of health.

"They told me that if I didn't give authorization, they would get a judicial order to enter my home by force and sacrifice the dog," he told El Mundo newspaper.

The authorities said in a statement there was a risk the dog could be "a carrier of the virus even without showing symptoms", and that it could "expel the virus in its fluids with a potential risk of contagion".

Romero said the dog, Excalibur, was isolated at home with a stockpile of food and water and could relieve himself outside.

The story triggered a petition and some heated responses on Twitter, under the hashtag #SalvemosAExcalibur (#SaveExcalibur).

Animal rights group Pacma said there was no evidence of the Ebola virus being transmitted from dogs to humans.

"He should be examined and placed in quarantine, and treated if necessary," said Javier Moreno, a co-founder of Pacma.

Over 310,000 people had signed a petition calling for Excalibur to be isolated rather than sacrificed as of 2pm on Wednesday.

A Facebook page dedicated to saving the dog had also attracted over 100,000 likes.