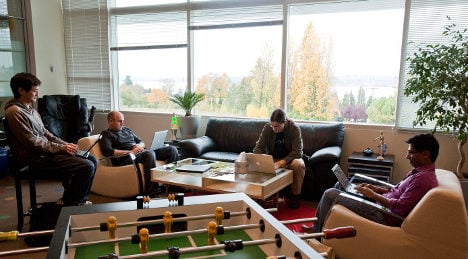 Google’s Madrid offices already employ 200 people, many of whom are likely to volunteer and offer advice at the new campus. Photo: Stephen Brashear/AFP

Google are calling it a “new home for innovation” in Spain, a country where entrepreneurial spirit and the lack of state support provided to self-starters have been a matter of debate during the country’s economic crisis.

The American multinational announced on Monday that its third European campus after London’s and Tel Aviv’s will grant “unparalleled access to mentorship and trainings led by their local start-up community, experienced entrepreneurs, and teams from Google.”

In an interview with online Spanish daily Cinco Días, Google’s Director of Entrepreneurship Mary Grove said the London Campus had “helped 70,000 participants, set up 274 new start-ups, generated €43,31 million ($54M) in earnings and created 575 jobs, all in two year and a half years”.

Grove denied the search giant had chosen Madrid to try to win over the Spanish government over recent tax-dodging claims and other issues involving privacy and antitrust laws.