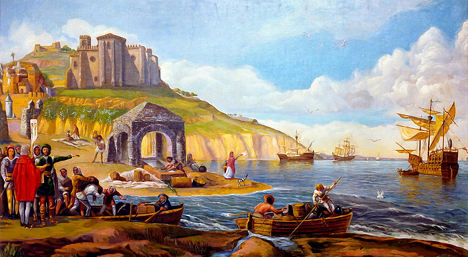 After two months of arduous work, a team of archaeologists from Huelva University have unearthed the remains of a port in the southern Spanish town of Palos de la Frontera.

According to Spanish radio station Cadena SER, they’ve discovered a large potter’s workshop which showcases how La Fontanilla port was the vibrant point of craftsmanship and trade historical accounts had described it as being.

The finding has helped to locate the point where ships, including Columbus’s three vessels to America, probably set sail from, as the shipyard’s remains could not withstand the passing of time and the rise of the river bed.

With the help of Palos de la Frontera Town Hall, the team have also managed to identify the remains of an inn, a tavern and a storehouse.

Mayor Carmelo Romero is now hoping the remains of the real Santa María – Columbus’s flagship – as well as his other two caravels the Pinta and Niña, will be discovered and brought to back to their rightful home.

Unfortunately for him, recent claims that the Santa María had been found off the coast of Haiti were scuttled by UNESCO on Monday, who argued the wreck is that of a ship from a later period.

Although he believed he would reach Japan, he ended up landing in what is modern-day Bahamas, initially believing he was in India.

Under the auspices of Spain’s Catholic Kings Ferdinand and Isabella, his ‘discovery’ of the New World led to the first lasting European contact with the Americas, with the ensuing exploration, conquest, and colonization of the continent over the course of several centuries.